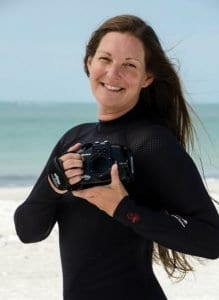 Amanda Cotton has loved photography every since she was in middle school. That love for the art from became an obsession all throughout high school. The passion for taking photographs that was carved throughout all those years was what led her to the Brooks Institute of Photography in Ventura, California (sadly the famed arts institute closed shut down in 2016).

At Brooks, Amanda participated in the Underseas Program, which was established by photographer Ernie Brooks. She enjoyed the time spent in the program and it served as a start-off point for a career in underwater photography.

Amanda has been diving since 1999 and her work has been featured in Discovery Channel, National Geographic, and Smithsonian – just to name a few. She has also received numerous awards for her underwater photography, including the International Photographers Awards, Celebrate the Sea, and Underwater Photography Annual Awards, among others.

Amanda has also taken her love for the ocean a bit further. She established Water Women Inc that provides internships and mentorship programs for girls ages 8 to 18 who want a water-related career.

Apart from a passion for the ocean and its creatures, Amanda also has a fondness for airport carpets which she calls a “weird obsession” and has collected photos of more than 500 different carpets.

Amanda has been diving since 1999 and since then, she has taken a variety of photographs featuring creatures living beneath the water. Her photographs have grazed several publications and news sources, including the BBC, CNN, Scuba Diving Magazine, and Sport Diver Magazine.

She is a Women Divers Hall of Famer and shot ocean creatures, great and small. Through her site A Cotton Photo Creative Works LLC, Amanda aims to help visitors become personally involved in protecting aquatic systems. Visitors can browse through the galleries to purchase images in both digital and print formats or simply look for information on how they can help save the oceans. The site’s vision is to preserve the sea’s creatures by making those who are unaware of their existence.

In addition to making images available for purchase, A Cotton Photo also offers different expeditions where participants can experience the underwater world up close. There are expeditions to Dominica to see sperm whales, to Mexico to see whale sharks, and Norway to see orcas, among others.

Amanda also set up a nonprofit called Water Women Inc. in 2014 to provide girls aged 8 to 18 who are interested in a water-related career with internships, mentoring, and scholarships. The program pairs the girls with a highly trained female mentor  who trains them in the specific field of their choice, be it commercial diving, marine science, marine biology, or underwater photography.

Amanda’s underwater photography has been featured in news sources and publications all around the world. Her work has been featured in Natural History Magazine, Earthweek, Science Daily, as well as BBC, Discovery, National Geographic, Smithsonian Magazine, and Times Publishing. Amanda’s work has also been included in Sport Diver Magazine and Scuba Diving Magazine.