You are here: Home / Photography Tips and Techniques / Food Photography: 4 No Nonsense Tips

People have been taking food photos way before the rise of Instagram. But the photo-sharing platform can be credited, along with smartphone camera improvements, with the increased interest in food photography.

A lot of people found an outlet where they could snap a photo of their meal or whatever it is they were drinking and immediately share it with followers. But let’s face it, there’s an art to taking pictures of food.

You don’t just snap away hoping the result looks great. There are methods, whether using a smartphone or an actual camera, to making food look delicious on a photograph.

Here are some food photography tips for better looking photos:

Pay attention to the light source

A bird-eye shot is one of the most popular in food photography. It’s the kind of shot to go for whether capturing a single dish or a full banquet. But it’s not the easiest one to take.

One of the major hurdles when taking a top-view shot is the light source. You have to know where it is in order to take a decent photo at the very least. A light source that is right above creates shadows, which aren’t always welcome, but can be fixed by moving around. The most preferable light sources are those that come from the front or the sides.

Another obstacle to taking shots from the top is making sure your hands don’t tilt or shake. So either a selfie stick or a tripod can help you out with stability here.

The biggest issue with this shot is, of course, trying to get it decent in as few tries as possible. Otherwise, you run the risk of eating food that has gone cold or worse, annoying the people you are with by making their meal unsatisfactory.

Include other dishes (or whatever else is on the table)

A dish on its own looks great when shot brilliantly. But you can add variety to your shots by including other dishes into the frame or involving whatever is on the table. 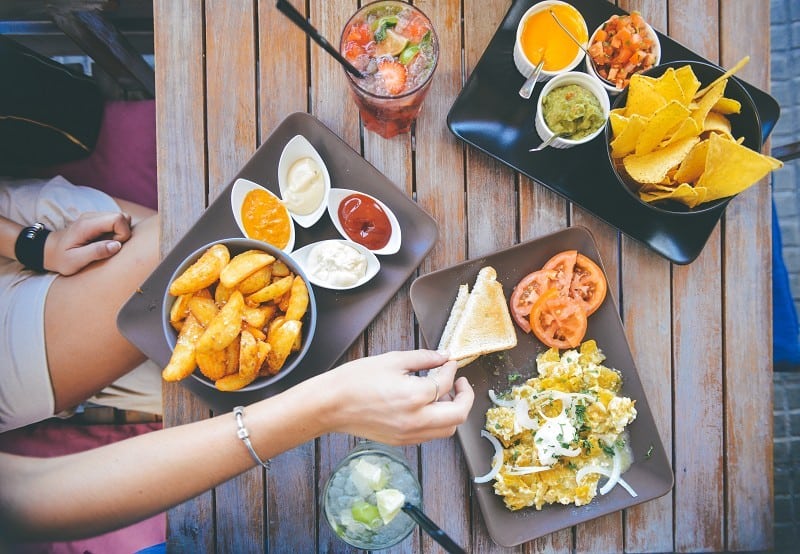 Food isn’t just there to be looked at; it is to be savored and enjoyed. So yes, food photography should, at some level, showcase people who are actually eating a meal.

There are different ways to go about this. One, you could be absolutely candid with your shots. Two, you can go the scripted route.

The latter is rather popular and can involve simple actions like showing a person dipping their spoon into soup. Framing can be used here as well: showing the face and body of the person or just showcasing their hands.

It doesn’t matter whether you’re having ice cream out on a hot, sunny day or enjoying a pizza at a restaurant, including the environment you’re in makes your food photos more interesting. Plus, a lot of restaurants are designing their spaces to be Instagram-worthy these days.

Taking photos of your food is fun, but it’s also more important to remember that food is better consumed while still hot. So feel free to snap away but also keep in mind that you paid for a dish to eat it.