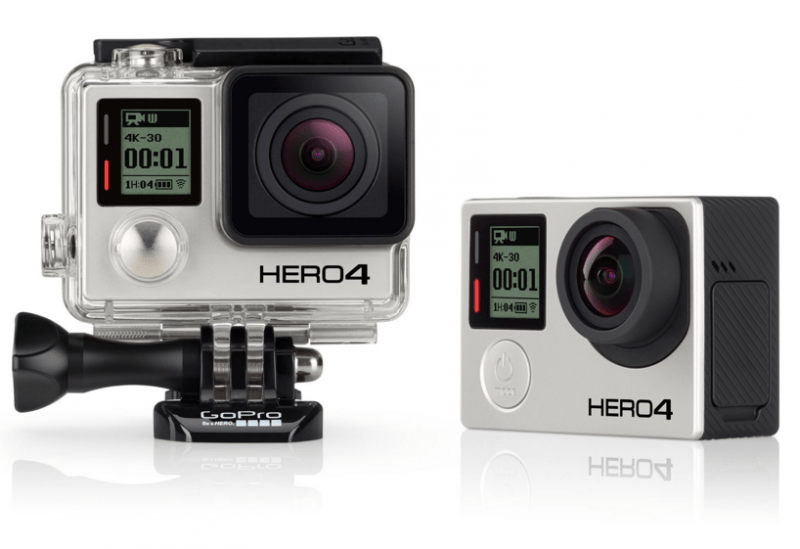 In recent years, GoPro has shifted their focus on the professional camera market. However, this does not mean that the company has turned its back on extreme sports—they are just adding high-end cameras to their line-up to offer to consumers something that can capture footage that is worthy of broadcast. One of these models is the flagship, Hero4 Black, which is a small camera that is able to shoot in 4K.

GoPro’s Hero4 Black is already being used to shoot broadcast-quality footage of sports events, from the Tour de France to extreme sports that are sponsored by Red Bull. Aside from this, it is also seen being used for filmmaking, with its small size allowing cinematographers to easily shoot high-quality footage from difficult areas. What’s more, it is cheaply compared with other professional video equipment. So, if you are thinking about getting yourself a GoPro, you might want to consider the Hero4 Black as a choice. 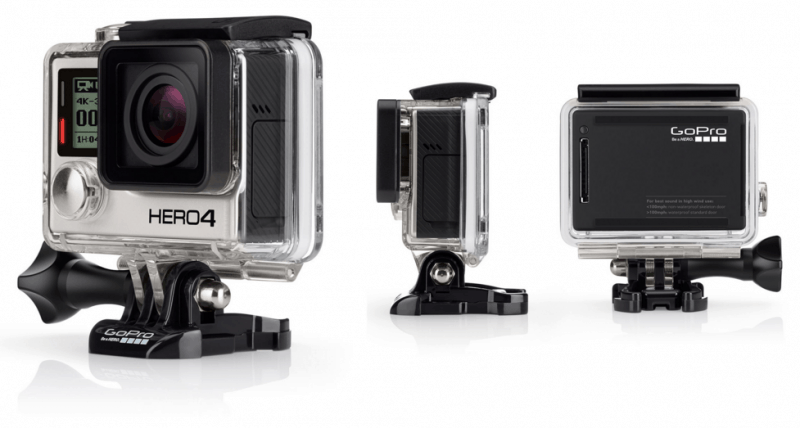 Owners of the predecessors of the Hero4 Black, such as the Hero3/3+ Black, have noticed some little, but important, developments with the new camera, with the most cited being the new design of its battery compartment. No longer will it slide in the back, but will rather drop into the bottom, which makes swapping batteries out easier. However, you will no longer be able to use batteries from previous models as the new battery has also undergone a new design for the change.

Another key change of this new camera from GoPro is its set of buttons. While the layout remains the same, the previous Wi-Fi power button on its right side is replaced with a “Hilight Tag”, which makes going through hours of video to look for that one perfect moment easier.

When you are not recording, you can use the same button to access your settings menu. GoPro has improved its past models’ menus, which are quite disorganized, and made everything sensitive to which mode you are in, which means that if you are in video-capture mode, just press the settings button and you will only get setting options for video. 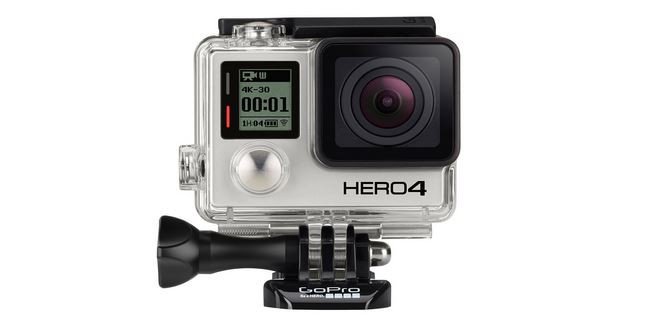 On the left side of the Hero4 Black, you will find a removable easy-to-lose cover that protects the Mini-USB and Micro-HDMI ports, as well as the microSD slot supporting cards up to 64GB. The Mini-USB port functions for transferring content off your microSD card and charging, but it can also be connected with an optional 3.5mm stereo mic cable to let you attach an external mic of studio-quality. Though this model does not have a built-in touchscreen, there is added a Hero port on its back, so you can still attach the company’s LCD Touch or the Battery BacPac.

As for the front activity lights, they have been moved from next to the lens to the side of the monochrome display, which definitely needs to be backlit.

The camera also comes with a waterproof housing that can withstand 40 meters of water depth, a skeleton door for better-quality audio when you need full water protection, 2 adhesive mounts, vertical and horizontal quick-release buckles that attach to the bottom of its housing and a 3-way pivot arm. Another additional accessory that comes with the package is a small locking plug that helps prevent the buckles from accidentally releasing from the mount from vibration or force.

Compared to what are included in its predecessor, the Hero3+ Black, the Hero4 Black is just similar with one exception—it does not include the GoPro Wi-Fi Smart Remote, which was redesigned to give way for the new HiLight/Settings button.

The Hero4 Black from GoPro delivers best-in-class videos at resolutions of up to 4K at 30fps or 1080p at 120fps. It is also compatible with a wide array of mounting options from the manufacturer and 3rd-party manufacturers.

On the other side of the coin, you would notice that its battery life is quite short, and because of the redesign, you will not be able to use older batteries from GoPro. Moreover, there is no option for in-camera digital image stabilization, and it still needs a housing to be resist water.

GoPro HERO4: The Adventure of Life in 4K

Before you consider getting the GoPro Hero4 Black, first ask yourself if you want to capture 4K videos or not. But if you are a working pro or someone who wants to future-proof your content, then this is your best choice of a GoPro camera. Though you are just a casual shooter, then it is still fine to go for this one to enjoy cutting-edge features and ensure quality of images and videos.

Automatically creates video from frames captured at set intervals. Available only in 4K and 2.7K 4:3 resolutions.

Record video and capture Time Lapse photos at the same time. Available intervals are 5, 10, 30 and 60 seconds.

Record a continuous video loop that overwrites itself until you press the shutter button to stop it and save.

SuperView video mode captures the world’s most immersive wide-angle perspective. It allows you to capture more of yourself and your surroundings in the shot, and it provides full widescreen playback.

Continuous Photo (up to 30 seconds)

Capture a single photo with a customizable exposure time of up to 30 seconds.

Applies only to Night Photo and Night Lapse and determines the amount of time that the shutter is open.

Capture up to 30 photos per second.

Automatically capture a series of photos at timed intervals.

Capture a series of photos at specific intervals and exposure times.

Applies only to Night Photo and Night Lapse and determines the amount of time that the shutter is open.

Adjusts the overall color tone of videos and photos.

Allows you to adjust the color profile of your video footage or photos.

Adjusts the camera’s sensitivity in low-light environments, and creates a balance between brightness and resulting image noise. Image noise refers to the degree of graininess in the image.

Controls the sharpness of your video footage or photos.

Affects the brightness of your video. Adjusting this setting can improve image quality when shooting in environments with contrasting lighting conditions.

Spot Meter is ideal for filming within a dark space with the camera pointed towards a brighter setting (such as filming the outdoors from within a car).

With the press of a button, the camera automatically turns on and begins recording video or capturing Time Lapse photos.

The chart below indicates the approximate continuous recording time (hr:min) you can expect when shooting in various video modes using a fully charged battery.5