With the emergence of compact gadgets like smartphones and action cameras and the domination of the Gen Z and millennials, seeing people carrying multiple devices to capture videos and photos for social media sharing has become commonplace.

Spacemap, however, became curious about how people will react with the idea of wearing a camera instead of carrying one. With Beoncam, it tries to gear this practice towards a different direction as it launches a five-megapixel, removable camera that can also tell time. Instead of a watch capable of other functions, such as a camera or an extension of your smartphone, this invention is wearable hemispheric camera that can also display time.

It can be remembered that Google Glass was not given a warm welcome when it was launched, with critics and even protesters expressed their disappointment with how it affected the lives of some people. The virulent rejection it received from users made companies reluctant of coming out with camera glasses. But Spacemap is taking a chance. 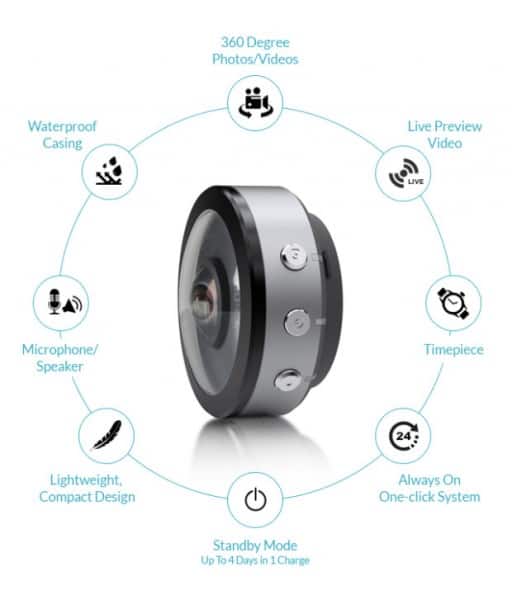 With a camera worn on the wrist instead of on the face, the reaction might be different this time. Moreover, having a back up gadget for taking selfies when a smartphone is not available can be a smart move and a practical one at that, in terms of convenience.

The digital display that tells the time lessens, if not removes, the oddity of wearing something on the wrist that looks like a watch and yet functions as a camera. On top of this, the Beoncam can also be attached on a bike’s handlebar a backpack and a tripod without taking much space.

In terms of features, this product does not disappoint. Apart from a standby period of four days with a fully charged 400mAh battery, it can be recharged using a microUSB cable. It also has an app that is compatible with iOS and Android that will allow the user to preview videos. Another appealing feature of this device is that it can also function as a wireless hotspot.

Meanwhile, for those who want to get discounts for purchasing Beoncam, Spacecam is launching it via the crowd funding website, Indiegogo. Early buyers can get this exciting wearable action camera for only $119. This is a $30 slash from its retail value of $149 and delivery can be expected by July 2017.