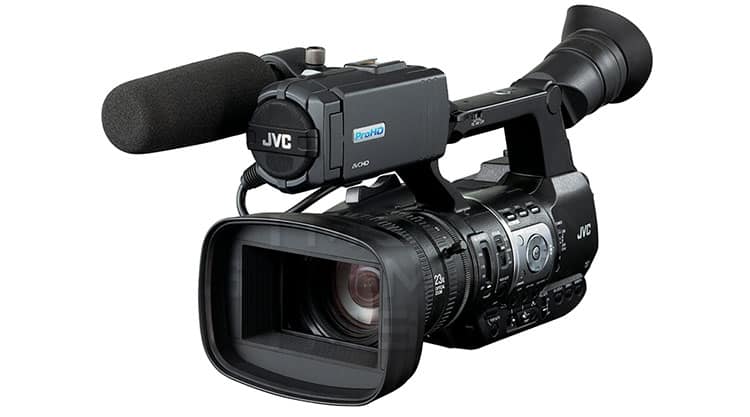 Any JVC GY-HM600 ProHD Mobile News Camera review will say that this model is just like the GY-HM650, minus one

capability: wi-fi connectivity. The question is, why should buyers be bothered with this model when there’s a similar one that offers more? One reason is that the price tag on this one is lesser than its more sophisticated counterpart. Another, the GY-HM650 is more useful for those that want immediate live streaming and uploading of recorded clips. This JVC GY-HM600 ProHD Mobile Camera review will look further into the similarities to help you decide which device to choose

Just like the GY-HM650, this model was designed to be portable making it easy to carry around anywhere. It’s also very light – weighing at 2.4 kg or 5.3 lbs – which helps a lot for coverage that lasts a long time.

Both the JVC GY-HM600 ProHD Mobile News Camera and GY-HM650 were designed with ergonomics in mind. Their handgrips are quite comfortable and come in handy for long shoots. The main functions are readily accessible from controls and switches on the camera body as well.

With menu items and settings that are immediately accessible, there’s no question that the GUI of both the GY-HM600 and GY-HM650 are user friendly. The improved GUI also gives users an easier time to customize settings according to their preference.

Measuring 3.5”, the camera’s LCD monitor can be swiveled for ease during handheld shooting at different angles. It can also be flipped to function as a talent monitor.

Both these models’ viewfinder comes at a high resolution: 852 x 480 x 3. Not only that, they’re Liquid Crystal on Silicon (LCOS) and offer more crisper and detailed images.

Both the JVC GY-HM600 ProHD Mobile and the GY-HM650 provide superior imaging quality. They’re both equipped with three 1/3-inch CMOS sensors that are individually capable of recording HD images with a 1920 x 1080 resolution. The cameras also make use of 3 images making it quite capable of recording in full HD in all three color channels.

The GY-HM600 and GY-HM650 both come with the Fujinon wide angle 23x zoom lens that are for improved magnification. The cameras also perform quite well in low-light scenarios thanks to its LoLux feature.

Furthermore, both models also carry the FALCONBIRD image processor that allows them to process lots of data in the shortest time possible.

The JVC GY-HM600 ProHD Mobile News Camera and the GY-HM650 are both capable of recording in MPEG-2 Long GOP 35.25.19 Mbps format widely used by television broadcasters and the AVCHD 24/17 Mbps mode which is compatible with a lot of editing systems that don’t break the bank.

Both cameras can shoot footage in HD or SD format directly into ready-to-edit QuickTime MOV files, which is the file format used in Apple’s Final Cut Pro application. Those using Windows can record use the MPEG-2 mode to record clips in MP4 format, which can be edited directly using Adobe Premiere and other NLE systems.

The JVC GY-HM650’s biggest advantage over the GY-HM600 is its wifi connectivity. With the feature, live transmission is made possible without needing a microwave or satellite truck. Not only that, video recordings can also be uploaded directly to a cloud server. The recorded images can also be checked by using a PC, tablet or smartphone.

Those who are looking for a camera with great image quality, stunning image processing, overall friendliness without needing to live stream or transfer files immediately will surely find the JVC GY-HM600 ProHD Mobile an interesting and worthwhile investment. And at a price lower than the GY-HM650, there’s no reason not to grab hold of this device today! If you want to look at more footage and see the HM650 go here

Buy the JVC HM600 Now at the best price