Flying a drone that can take 4K videos is a great experience, but there’s something much cooler: a 4K drone that can be used in rain and snow and even land or water. UK-based company QuadH2O wants to provide you with this experience through the HexH2O Pro v2, which is the latest model in its line of waterproof drones.

The HexH2O Pro v2’s body is made of epoxy fiber composite, which makes it lightweight and ensures it’s strong enough to withstand wear and tear. Its frame weighs 1.45 kg, although this rises to 4.8 kg when you add on the gimbal, batteries, and a GoPro camera. It measures 740 mm (width) x 240 mm (height) x 650 mm (length) when fully unfolded.

The drone uses two Gens Ace 8000 mAh LiPo 6S high-voltage batteries in parallel. With these in place, it can reach a maximum flight time of 30 minutes, although the average flight time is around 26 to 28 minutes. It can carry up to 2 kg in payload and has a maximum wind resistance of 25 mph. 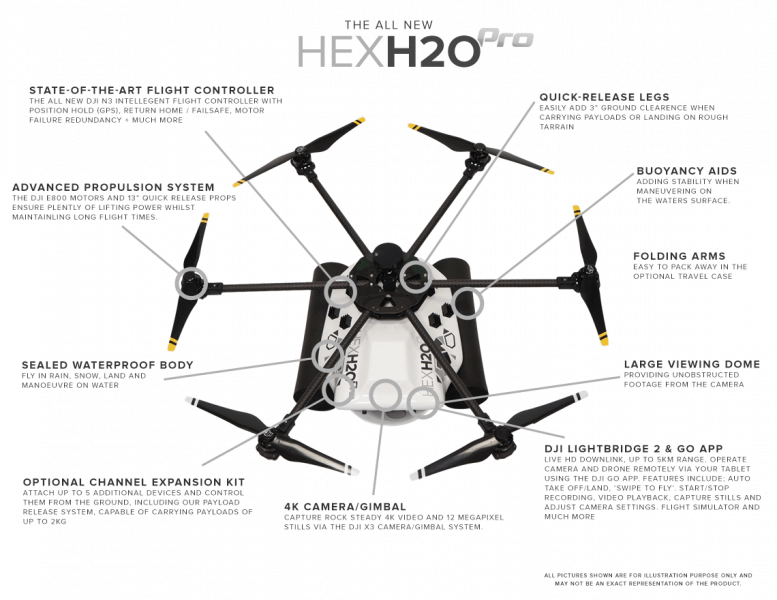 Designed to be a sealed, watertight unit, the HexH2O Pro v2 can be flown even when it’s raining or snowing. It can even land on water and film below the waterline! It’s built with buoyancy aids that keep the unit stable while it’s on the water surface, along with brushless motors that maintain excellent performance even when they get wet. All of these features make the drone a great companion if you love water sports or if your work requires you to be near or in the water.

The HexH2O Pro v2 is built with the three-axis DJI X3 camera/gimbal, which continuously analyzes flight data to keep track of flight parameters and correct movements in real time. As a result, your drone stays level throughout the entire flight and lets you take precise, high-quality shots.

The HexH2O Pro v2 is powered by the DJI N3 flight controller, which the latest model in the NAZA flight controllers series from DJI and is built for dependability. It comes with Dual IMU Redundancy, which allows it to detect IMU failure even in mid-flight and switch to a backup unit to keep the drone stable and safe. It also features Intelligent Flight Modes, which are a set of built-in modes that automatically take professional-level aerial shoots. No need to master advanced moves on your HexH2O Pro v2; simply choose the right flight mode and start capturing breathtaking stills and videos!

These specs and features have probably made you eager to get your hands on the HexH2O Pro v2. Fortunately, you don’t have to wait for long since it will be released on March 31 with a starting price of $6,449 for the basic kit. If you have a bigger budget, you can expand the kit with the optional payload release system and other add-on devices.