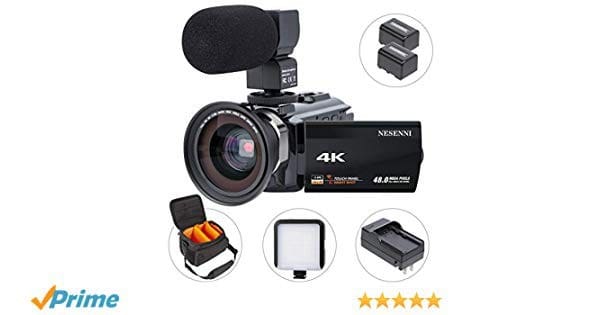 When it comes to video camera selection, you probably won’t hear the name Nesenni offered up a suggestion. Quite often you’ll hear the usual Panasonic, Sony, or maybe even a Canon or Nikon. But what if someone told you that you can get features offered by big-name camera manufacturers but at almost half the price? Would you go for it?

The 4K video camera from Nesenni is making quite the case as an affordable option despite its limitations. The 4K support for a camera worth almost $300 is quite tempting. Plus, the package comes with lots of accessories too.

In short, what’s not to like? There are a few complaints but if you’re not too picky about brands and just want a decent camcorder to record daily activities or need one to start vlogging, the Nesseni 4K video camera is a decent option. 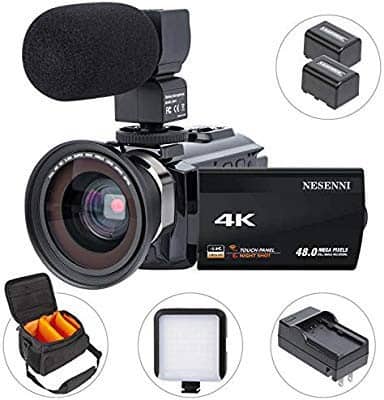 Given what it has to offer, the Nesenni 4K video camera wasn’t made with the professional in mind. It clearly can’t compete with the big names BUT it does offer an alternative for those who can’t quite afford the known brands but also want something a step above their smartphone cameras.

If one of the factors of your video camera assessment is build quality, then you might be disappointed with the Nesenni. To be fair, you’re not going to expect high quality for something that’s worth close to $300. The camcorder is of lightweight quality and you might even fear for its safety in the long run.

Let’s set that image aside to talk about its audio and video features. The verdict on this is mixed, especially on the audio side. If you’re expecting a rich audio recording, then you will be sorely disappointed. But that is using the stereo mic; you might fare better using an external mic but don’t expect too much.

Video is one of the selling points of this video camera. Its offering of 4K shooting capability at close to $300 seems like quite the bargain? But is it any good? Quite.

The Nesenni 4K video camera can shoot 4K at 24fps. Yes, that’s less than what other better models can do. However, you can’t complain if you want an inexpensive camcorder for shooting 4K video. Then again, the image quality isn’t that bad. Yes, it’s of lower quality but the results aren’t really poor. In other words, it’s just fine.

That said, the glass protective cover over the lens isn’t doing it any favors. Having that element creates multiple reflections, especially when shooting in a dark place with bright lights. However, it’s not an issue with a regularly lit room. 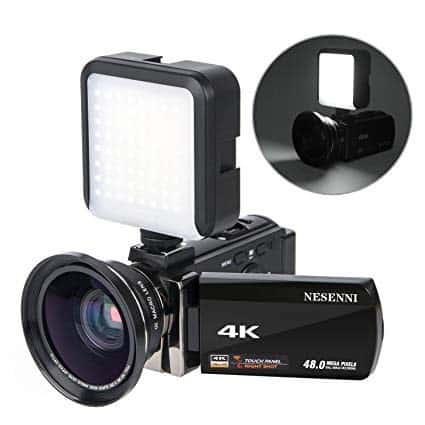 Like many of the newer camcorders, this one also comes with touchscreen functionality. However, the icons are squeezed so tight together that there’s a chance you keep hitting the wrong button most of the time.

Despite its failings, the Nesenni 4K video camera comes with several accessories. One of them is a screw-on macro lens that helps you shoot subjects from up close since the lens focus is fixed. You also get two batteries in the package, as well as a camera bag. Isn’t that nice?

Another interesting feature with this camera is that it performs quite well in low light situations, which is always helpful. 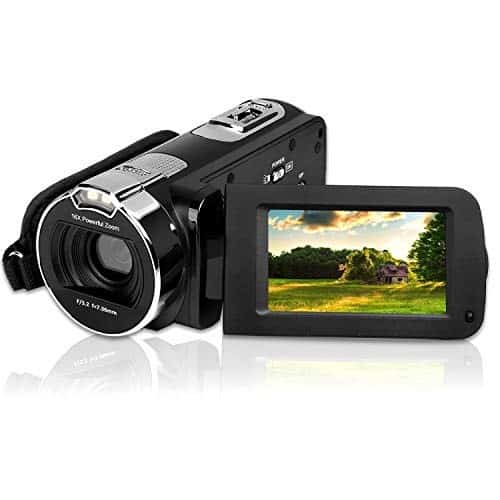 But if you just want a video camera that isn’t expensive and can do the basic things required of it, then you won’t mind that this model’s limitations. It’s quite a bargain camera given it supports 4K recording and only costs close to $300.

[embedyt]ANOTHER VIDEO OF THE PRODUCT

Sure there are much better video cameras than the Nesenni 4K, but if you’re concerned about spending too much on a video camera for trivial recordings, then this model seems right for you.

It may not have the greatest features but it does what’s asked of it: record footage and take pictures. The image quality is decent and it even does well in situations with low light.

If you are looking for a decent camera that doesn’t cost a fortune, try to consider the Nesenni 4K video camera. It may not be a top brand but it’s perfect when you just want to use it for random recordings.