It supports a wide range of features, such as high-speed transfer, immersive spatial audio recording, and a 360-degree 4K video capture.

The camera body is designed lightweight and compact to allow for easy handling and better portability. You can carry it around everywhere and enjoy its many features.

Designed to accommodate large volumes of data, you can record 360-degree 4K video with high-quality sound recording that works with 360° spatial audio, and will have no problem browsing and transferring large files to a tablet or smartphone.

The RICOH THETA V comes with Bluetooth and wireless LAN for flexible connectivity, depending on how you wish to use the camera. Made to receive firmware updates for future performance enhancements, it is one of the best high-end and expandable cameras. 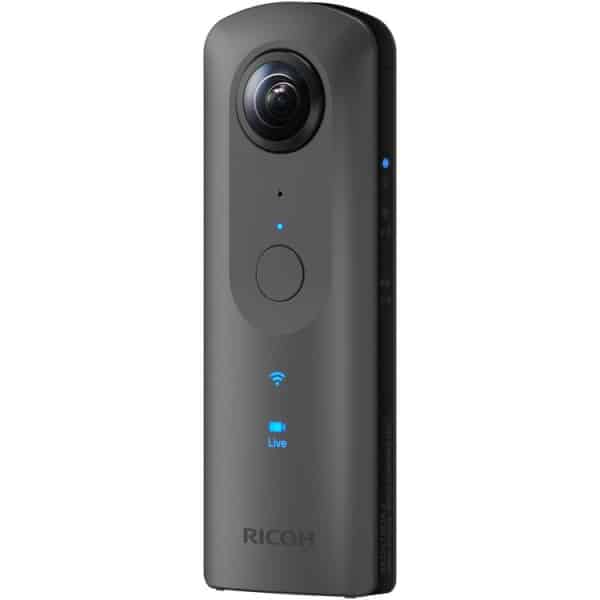 A background on the RICOH THETA V

This new camera from Ricoh is an improvement from the RICOH THETA that was launched in 2013. It was the first 360-degree single shot camera in the world with exceptional imaging features and functionalities that allow for unique and unexpected visual expressions.

Since it was unveiled on the market, the RICOH THETA has been used in a variety of visual fields.

One of its highlights is the 360-degree visual space that exceeds conventional shooting composition of photography and allows photographers and creative professionals to capture images in a 360-degree atmosphere.

It also paved the way for expansion to virtual reality market.

Designed to record 360-degree still images with output pixels of up to 14M equivalent, the RICOH THETA V will not disappoint where output images are concerned. This is especially true with a new algorithm that reduces noise and delivers high-quality images from low to high sensitivity.

You can also use the camera to record high-quality 360-degree videos at 4K/30 fps. The realistic spherical images recorded will have a resolution of 3840×1920 but may vary, depending on the magnification ratio used and the display of the equipment where the recorded video is played back.

Equipped with a 4-channel microphone, RICOH THETA V supports 360-degree spatial audio recording that allows for an overwhelming realistic audio input. High-quality sound and video reproduction are made possible with the omnidirectional audio feature and the use of the optional “3D Microphone TA-1”, a dedicated accessory from Audio-Technica Corporation. The device allows for pickup of natural sound at low to high frequency with a large volume of information.

With the wireless communication module improved and the data processing speed increased, RICOH THETA V can communicate with other devices and transfer data at a speed of around 2.5 times faster. Even data images in large volumes and higher resolutions can be browsed and transferred at a comfortable rate.

There may be slight variations in the speed depending on the devices used, but expect nothing slower than the estimated number.

In addition, RICOH THETA V comes with a plug-in that allows “Remote Playback” for 360-degree videos on large displays or over projectors. You can mirror playback of still images and videos from the camera to a bigger, wider display.