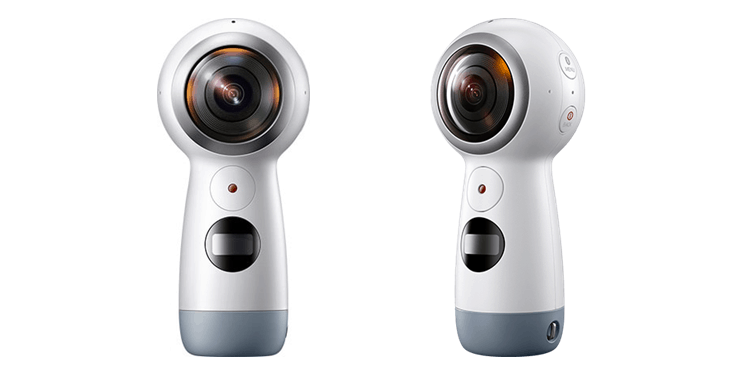 Until the latest Samsung Gear 360 can be fully tested, the only way to judge it is by its official specifications. The first model was released in 2016 and didn’t have the most attractive look and the 360 videos were just nauseating. This year, Samsung has made quite a few improvements that deserve praise but the ultimate of which will be reserved once this unit is tried and tested.

The 2017 version of the Gear 360 still uses two fisheye lenses on each side of the camera but its design is a lot more appealing. Unlike the original model which was just basically an eye with a tripod, this current unit still features the eye but it’s attached to a stalk. This looks like a good move as it lends more stability but the shakiness of the resulting video might still largely depend on how a user handles the device while in motion. Then again, this model might just take better 360-degree selfies.

Stability is much better in this edition of the Gear 360 as it comes with a rubber ring which, when attached to the bottom of the camera, keeps it stable when put on a flat surface.

Video capabilities have also improved from the previous version. The first Gear 360 could capture close to 4K video but this one can shoot real 4K video. Again, this looks like good news especially for those who want to get more detail when editing in HD.

Live streaming is a big thing these days with Twitter and Instagram offering the option to their users. Of course, YouTube has already bitten that bug and that’s where video from the camera can be live-streamed. Technically, the feed is streamed to a smartphone which is then sent to YouTube or Facebook as a Live Broadcast. Although the camera is capable of 4K video capture, the live streaming option is capped at 2K.

Another issue with 360 video is the problem of transferring it for editing purposes. The 360 nature of the capture means there’s a lot of data to be processed. How the newest version handles this can’t be determined until a test device is tinkered with.

The first Gear 360 provided an opportunity for users who wanted to play with 360 video. Even with lots of drawbacks, it was still a good starting place. One of the biggest disadvantages of that unit was that it worked only with a Samsung system, specifically newer models such as the Galaxy S7 or S7 Edge. The latest version, however, is more open as it can be used on not just new Samsung models but on any Android-based smartphone with at least version 5.0 as well as the recent versions of iPhone.

Samsung hasn’t released details about price and release date. However, the company has mentioned that users can expect this model in the spring and that it would cost less than the previous model.

The latest Gear 360 is an indication that Samsung is serious with making 30 videos and photos a lot more accessible for everyone.