Sometimes, a person’s arms isn’t long enough to fit in everyone in a photo, especially if it’s of a huge batch. That can be remedied by bringing along a selfie stick but even that could only stretch so high. Drones can be another solution but they are bulky and you need a carrying case to transport them.

What if there was a way to not bring any extra equipment but still take great selfie shots from way up there? With the AirSelfie, that is very much possible.

Just as its name suggests, the AirSelfie is a device that allows you take selfies from up in the air – around 20 meters. Basically, it’s like a drone but one that fits right in your pocket. So it not only caters to selfie needs, but is also a massive plus in the convenience department.

AirSelfie is about the same size as a deck of cards. It has an aluminum body, a well-built structure, and above all else, isn’t that heavy (around 61g). That weight of it is of particular importance as you will need to attach it to a phone case. When combined, it can be rather thick but still very pocket friendly.

In charge of camera flight are four propellers, very much like other quadcopters. Keeping it stable and in a hovering position is an ultrasonic sensor that faces downward. 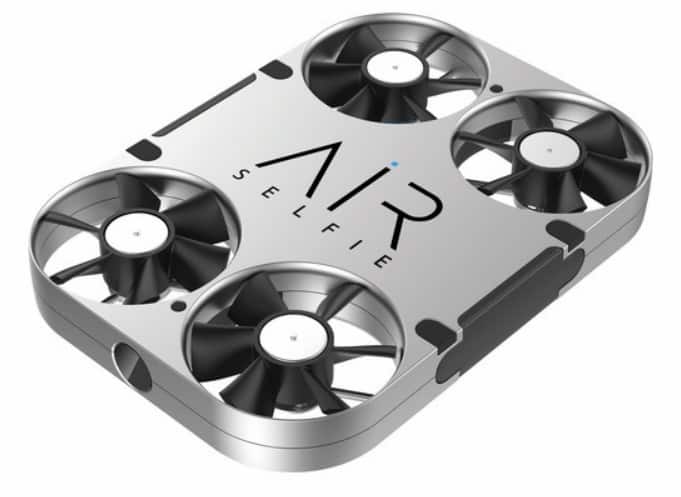 A 5MP resolution isn’t exactly the best thing on the planet given smartphone cameras can provide much better resolutions. The difference between them is that your camera can’t exactly fly on its own.

Some drone models may have gone smaller, but they are still rather big to just effortlessly carry around. The AirSelfie weighs 61g and comes with a special phone cover that will not only hold the drone but also charge it.

Charging time takes about 30 minutes. In addition, the cover is available for popular smartphone models such as the iPhone 6/6Plus, iPhone 7/7Plus, the Samsung Galaxy S7 Edge, Huawei P9, and Google Pixel.

AirSelfie comes with a companion app that is supported on both iOS and Android platforms. The app is intuitive and doesn’t require a lot of learning to get used to it. It was designed to help you get your pocket drone up and running in the quickest possible time.

AirSelfie is powered by a built-in 240mAh 7.4 LiPo battery that can offer three minutes of flight time. That is a rather poor comparison to what most drones can accomplish these days. But the AirSelfie makes up for it with its special phone cover which charges the device.

Then again, you can extend flight time to about an hour when you get the optional AirSelfie Power Bank. 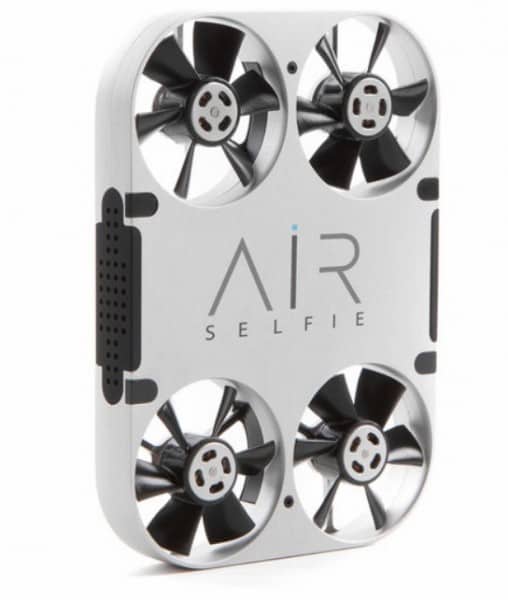 AirSelfie’s memory holder is a built-in micro SD card and the 4GB capacity is about enough to store captures for the day’s activities.

You just need to turn on AirSelfie and it proceeds to generate its own 2.4GHz WiFi network, which you will need to pair it with the companion app.

AirSelfie came to be thanks to Kickstarter. As with any new invention, there are things to nitpick about (the 5MP camera, for example) but it does provide newer heights – and perspectives – from which selfies can be taken.