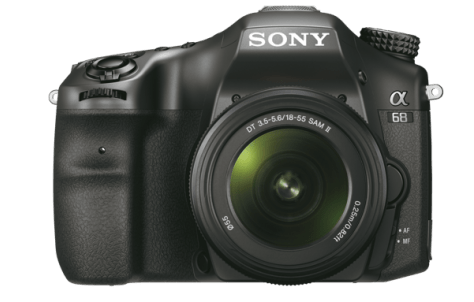 Sony A68 Hands On Review

Sony has a new offering for photography enthusiasts, a new single-lens translucent (SLT) camera from its Alpha line. It looks like a DSLR but does not really function as one. Capable of 8FPS burst mode, this camera is also compatible with all 34 A-mount lenses.

The feature that stands out from this camera is its 4D FOCUS system with 79 autofocus points, an edge over most of the cameras which do not have this capability. The result is a perfect focus on the subject even in low-light conditions as low as EV-2.

As for quality of images, its image processor, BIONZ X, is able to produce more realistic images, correct blurred details and clearer results even if ISO settings are set to high. The processor also boasts of area-specific noise reduction, one of its built-in features, which is capable of dividing images into areas and uses it to reduce noise, resulting to detailed, pristine high-quality photos.

Sony had both amateur and professional photographers in mind during the conceptualization of this new photo equipment as shown in the A68 specification and features. For shooting films and stills, the camera’s OLED Tru-Finder gives a full frame view of the subject as well as allows the user to check the different effects of its settings.

For shooting and recording videos, on the other hand, the body is designed with multi shoe and terminal which allow for connection of various accessories like a microphone, flashes and extra light for the video as well as give creative freedom to the photographer.

A68 sports a 2.7 inch LCD monitor can be tilted up to 55 degrees downwards and 135 degrees upwards, flexibility that gives the user different angles to shoot from. It also has a top display panel, perfect for users with tripods since it gives them the convenience of customizing the settings by simply looking down, without removing the camera from a tripod.

For easy, faster shooting and recording, the camera has function buttons that can be preset for functions that are regularly used. Eleven buttons can activate 49 functions through customization. Moreover, found at the back of the camera’s body is a control wheel that serves as a way to adjust camera settings by just using the tip of a finger. A front dial also exists for the same purpose.

At 24 MP, the APS-C Exmor CMOS sensor reduces noise and increases sensitivity at ranges of 12,800 for videos and 25,600 for still shots with an ISO setting of 100, allowing more light to come in. This feature is responsible for error-free shots and high-quality images even with low lighting.

If there is one missing feature, though, this would be the presence of WiFi connection capability. The robust A68 camera will be out in the market by March 2016 and will be distributed in Europe. It is available in two models, one is a body-only camera priced at around £440 while the bundled model, with 18-55mm zoom kit lens has an asking price of around £520.