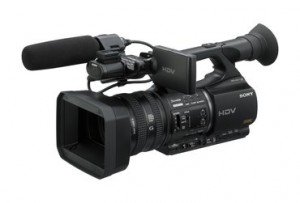 When we first heard that Sony had a new camcorder out called the HVR-Z5U, we were intensely eager to get our hands on this new product and try it out.

We weren’t disappointed. Here’s why.

The new Sony HVR–Z5U is fronted by the enviable 20x Sony “G” zoom. This G lens is virtually a result of Sony’s adoption of Konica where obviously both companies have years-worth of experience in making and designing lenses.

The G lens makes use of two extra-low dispersion elements which give way to a more accurate optics performance and a wider image range. Plus, it doesn’t hurt that the lens is relatively smaller compared to higher-end lenses on the market.

It has many other features such as excellent shutter and lens hoof, iris-only control, exposure control, etc. But perhaps its most attractive quality is Sony’s Steadyshot, an optical stabilization feature that gives way for three strength levels plus a more advanced setting for locking down images or footage.

The camcorder features an HDV format which allows the Sony HVR-Z5U to record high definition footage on standard miniDV tapes. Operators will also find it convenient that they can use the conventional mpeg-2 format as compression technique for their media. Best of all, you can switch from normal to miniDV mode as you deem it necessary when shooting in different settings.

Our Sony HVR-Z5U review also revealed that the CinemaToneTM technology on this camcorder is an intense and highly advanced addition. The two flavors, CinemaTone GammaTM and the CinemaTone ColorTM were capable of maintaining mid highlights and deepening color production, respectively.

As we combined the two flavors, the footage proved to be a film-like product which we found incredibly convenient. Plus, it can be activated with a touch of a button so we definitely loved this clever addition.

For a day of shooting high quality footage, standard LCD screens on camcorders can a bit deceiving. What could look like  perfectly-lighted footage can actually be a soft or out-of-focus video during edits and post-production. This is often due to the fact that most camcorders have LCDs that fail to resolve images the same way they are when recorded.

However, our Sony HVR-Z5U reviews found that even the LCDs had high resolution graphics. This is because the camcorder is equipped with a terrific 1 megapixel LCD screen, making it almost 4 times clearer than conventional camcorders on the market.

What other camcorders make up for in impressive lenses and optics, they lack in advanced audio settings and recording. However, the Z5U features a full stereo microphone which is capable of recording crisp and clear audio.

Other than the advanced built-in microphone, this device also comes with a high-end ECM-XM1 monoaural microphone. This makes the device perfect for run-and-gun projects or studio commissions, wherever is necessary.

The Assist and Range

It’s not uncommon for camcorders to have Focus Assist features, especially for equipment that have high caliber lenses. But as we used the Z5U, we found the peak focus assist as a simple way to tweak and sharpen images that are being recorded. In fact, even high-contrast subjects were easy to capture, something that is relatively rare in conventional camcorders.

Lastly, the Z5U was designed to have a 30% extension in terms of dynamic range. This means that it can provide a more accurate result of both high light and low-light settings. Operators will find a dynamic range more convenient especially when editing or correcting the footage.

The Sony HVR-Z5U may have all the qualities the conventional camcorders have. But because it is fronted with a top of the line lens, we have to say that it’s a shiny new toy that everybody deserves. So what are you waiting for? Get yours today!