In a world where smartphones are increasingly capable of just about anything, why is there still a need to own a separate camcorder? The answer is pretty simple: to satisfy the needs of those who want more out of their video captures. The Canon Legria HF G26, although just offering Full HD recording capability, is vying for your attention.

The Legria HF G26 has a lot of good things going for it. It is fast, comes in a portable size, and produces impressive image quality. In other words, it’s got the essential elements you’d want in a camcorder.

The Legria HF G26 is fitted with a 20x HD optical zoom lens that help you focus on details without sacrificing image quality. Equipped with a fast aperture (f/1.8-2.8), picture quality is not just outstanding but also very clear. The camera’s wide dynamic range and CMOS Pro image sensor allows it to capture quality video even in low-light situations. With Instant Autofocus, the camcorder is able to quickly identify a subject and focus on it.

We live in a generation of instant sharing. As such, recorded footage needs to be in formats that are compatible with many popular video players and social media platforms. Thankfully, the Legria HF G26 caters to that need by recording video in common formats such as AVHCHD and MP4 to facilitate easy sharing.

The Legria HF G26 can serve many purposes. For instance, a travel blogger or budding documentary filmmaker will find many qualities of the camcorder attractive. But in addition to producing outstanding visuals, users can attach several other accessories to enhance video production.

For instance, the Legria HD G26 features a microphone jack for better audio capture to go along with the video. It also has a headphone jack for easier listening during footage playback. The camcorder also comes with a Mini Advanced Shoe input for other compatible accessories. 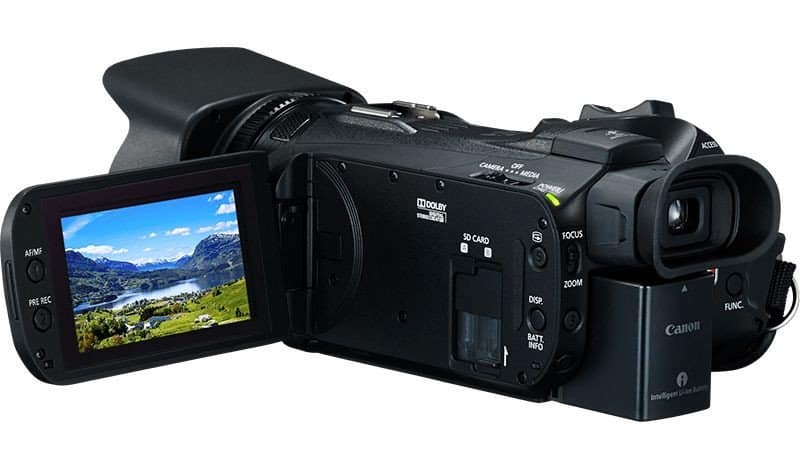 Compact in size, the Legria HD G26 is comfortable to carry around. A feature that is sorely needed for shoots that will last an entire day. The camcorder also comes with a 3.0-inch touchscreen, which is always helpful to make the transition easier for the smartphone generation. The 1.56 million dot EVF, which can be tilted, is a nice touch.

In addition, the camcorder uses a three-position switch for effortless switching between Manual, Auto, and Cinema modes.

The 28.8 wide-angle lens captures much of a scene and with a 20x zoom, details can be highlighted without distorting the image quality. With an eight-blade circular diaphragm, the Legria HD G26 produces beautiful circular bokeh.

However, pretty pictures are almost always ruined by accidental shakes. Canon addresses that problem by giving the Legria an Intelligent Image Stabiliser system, which compensates for five axes of camera movement. In other words, footage filmed while on the move will turn out smooth and shake-free.