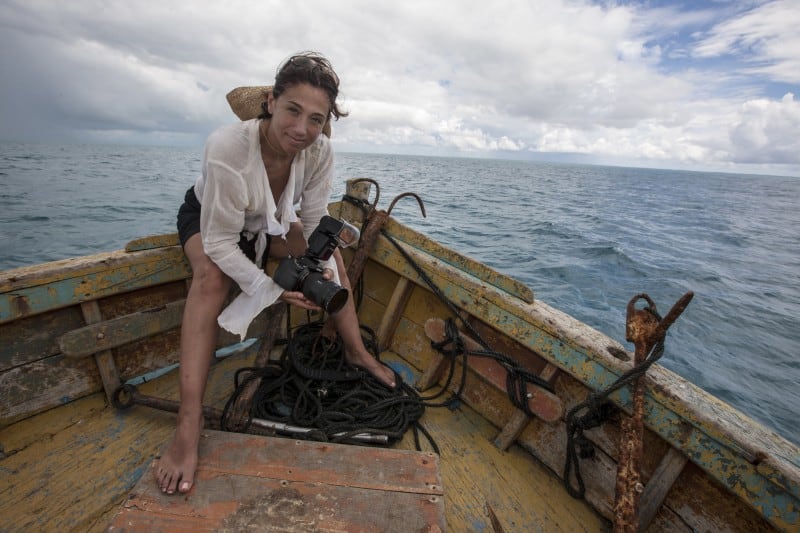 If it wasn’t for the college recruiter who talked about what a marine biologist does, Cristina would have pursued a degree in accounting, just like her father. But that was not to be. An interest in the life down below was too strong to resist.

After finishing her degree in 1989, Cristina went on to do a biodiversity assessment for a hotel whose owner wanted to create a biological reserve around the property. That job allowed her to meet her future employers, Conservation International (CI).

It was her work with CI that allowed her to meet Russell Mittermeier, who she married. She resigned in 1990 to avoid conflict of interest then spent the next six years accompanying her husband on trips abroad.

Cristina Mittermeier picked up photography as a hobby from these numerous trips abroad. After a photograph she took while on a trip to a remote Amazon village was wrongly attributed to her husband, she decided to study photography at the Corcoran College for the Arts in Washington, DC.

After 22 years of marriage, Cristina split from her husband. But she was bound to find love again. This time, her work with National Geographic allowed her to meet her  partner, fellow photographer Paul Nicklen. Together, they have traveled the world documenting many of earth’s species, focusing particularly on marine animals.

A love of photography and ocean’s creatures led to the creation of Sea Legacy, an ocean conservation group she co-founded to not only showcase the beauty of underwater life but to also help protect it.

She has three adult children: John, Michael, and Juliana – all equally passionate about nature. Cristina lives in Nanoose Bay on Vancouver Island with Paul.

In 2005, Cristina founded the International League of Conservation Photographers to provide photographers with a platform where they can showcase their work highlighting environmental issues.

Cristina was given the Mission Award from the North American Nature Photography Association and the Smithsonian Conservation Photographer of the Year Award in 2010.

She co-founded Sea Legacy, a non-profit group aiming to protect the ocean, in 2015 with Paul Nicklen. Cristina is also the recipient of the 2016 Imaging Award for Photographers Who Give Back.

Cristina is a member of the World Photographic Academy and has been recognized by Outdoor Magazine as one of the 40 Most Influential Outdoor Photographers in the world.

In addition to her photography work, Cristina is also a passionate public speaker. She has spoken at TEDx Vail Women and PIX 2015.

Cristina’s photographic work has been published in prestigious magazines such as National Geographic, Science, TIME, Outdoor Photographer, and Smithsonian.

She has edited or co-authored several books, including the CEMEX Conservation Book Series. She has also published articles in journals such as Nature, Science, and Conservation Biology.