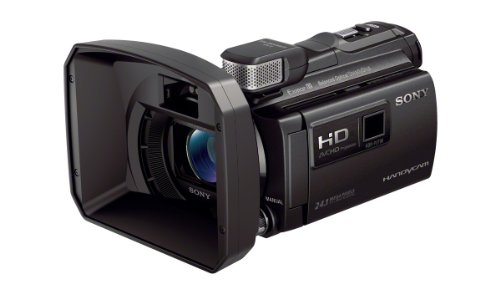 The 2nd generation of Sony’s projector camcorders indeed was nice but only constituted minute updates. This time, Sony has added up several additional incentives with its flagship model, the Sony HDR-PJ790V.

In this PJ790V review we’ll look into why this camcorder is worth your bucks.

If you have read other Sony HDR-PJ790V reviews, you may already know by now that Sony has made significant changes to the design of its 3rd gen projector camcorders. A noticeable change in the PJ790V is the integration of a surround sound microphone sticking out behind its fill light. This microphone effectively suppresses wind noise while recording in natural quality.

The PJ790V comes with the same 3-inch display with Xtra Fine LCD treatment, making visual look vivid and bright. Menu navigation purely relies on touch inputs as with the previous models but has been improved with the hot zones right next to scroll buttons.

This camcorder’s hand strap isn’t the most comfortable but it is functional in that it hides away the built-in USB cable so it wouldn’t be in the way. With this built-in cable, you can carry the camcorder anywhere, at anytime without having to worry about leaving your cable for file transfer or charging purposes.

As expressed in all other Sony HDR-PJ790V reviews, the camcorder’s built-in projector remains the highlight feature of the Sony HDR-PJ790V. Sony took a real big leap with this model, designing it to sport a more advanced and powerful bulb for brighter visual projection. Now, users can enjoy brightness up to 35lumens.

The PJ790V also features a new micro HDMI input which makes it possible to use the projector as output source for other devices. For instance, it can be hooked up to Blu-ray players using an HDMI cable. And with the camcorder’s Clear Phase stereo speakers, sound outputs are also now much better-sounding.

Buttons and manual controls present in the PJ790V include white balance adjustments, peaking, iris, focus and zebra. Users not too familiar with manual adjustments, however, may also utilize the Intelligent Auto feature which picks out the best mode settings possible from the 180 available combinations.

The PJ790V has an embedded flash memory with 96GB memory capacity and the option to switch to an HD LP mode. The mode maxes out at 720 p but this is the suitable format especially for video sharing online. Plus, there’s the dual memory card slot for bigger storage space.

In terms of performance and image quality enhancements, Sony didn’t take a leap too huge for the Sony HDR-PJ790V. The only significant addition in this section is the support for Mp4 file recording, which many prefer for easier project editing.

The HDR series, however, has long been known to come with impressive optical image stabilization. It remains a great technology especially for tacking blurs. And with the camcorder’s Zeiss lens, sharpness and image quality remains top notch.

With a $1599 price tag, the PJ790V can be quite a doubtful investment especially that it doesn’t have Wifi functionality and 3D features. However, it offers superb image quality, performance and user experience far beyond what its competition can. If these features are what you are looking for, then by all means, go for a PJ790V. The best thing about it is that you can even use it as your own standalone pico projector!