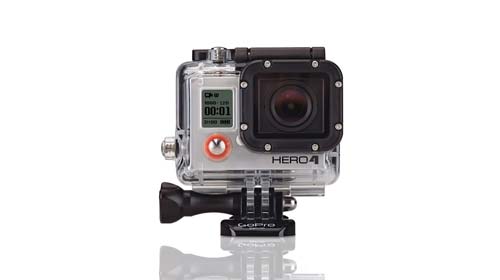 After all the rumors have circulated on the internet, GoPro has finally hushed all talks by officially launching the latest model of their Hero action camera. Both the Hero4 Black and Hero4 Silver will be released to the public this October. Both cameras also feature significant upgrades from the model that preceded them: the Hero3.

Of the two, the Hero4 Black is the one loaded with major updates. One, for example, is the faster frame rate. Other than that, the newest Hero model is capable of recording 4K video at 30 frames per second (fps). Plus, it can take 2.7k clips at 50 fps. The HD video frame rates for the Hero4 Black have also been increased to 120 fps.

The Hero4 Black is a 12 megapixel beauty that features photo bursts at 30 fps at full resolution. Not only that, the camera comes with faster WiFi and improved audio processing. In fact, GoPro claims that their latest Hero model will offer twice the dynamic range of the Hero3.

A new feature of the Hero4 Black is the HiLight Tag which allows users to earmark important moments in video while recording. An action that can be done with the use of the GoPro app or through the dedicated button found on the camera.

GoPro Studio, the company’s software, has also been updated so it can support HiLight Tags. Plus, it comes with support for the new Flux feature which can create effects such as slow motion and speed ramping.

The starting retail price for Hero4 Black is $499.

On the other hand, the Hero4 Silver – which will retail at $399 – is also capable of recording in 4K, but at a slower speed – just 15 or 12.5 fps. The frame rates are also slower at 1080 (max 60 fps), but it will have a new touch screen display. The HiLight Tag functionality is also available for the Silver. Additionally, the Silver can record 30 fps still photo bursts at 12 megapixel resolution.

Both cameras share similar features as well. They both have waterproof housings that’s good for dives up to 131 feet. They also have the Protune feature which allows uses to make manual adjustments for color, ISO, sharpness and exposure when taking photo and video. Both also have the new Night Photo mode to be used for low light time lapses, as well as QuickCapture which starts capturing video with just one touch of a button.

In addition, GoPro launched Hero, an entry-level camera. The model will start retailing at $129 and features a 5 megapixel sensor and is capable of recording 1080p video at 30 fps. Plus, it’s capable of 5 fps burst shooting and comes with a waterproof housing that is good for 131 feet dive depth.