You are here: Home / EP's Latest Camera News & Releases / MIT’s CSAIL to develop quadcopter drones that can drive and fly

There is no existing robot – yet – that could do what animals such as birds and insects can: fly and walk. Drones are improving with each release but flight time still remains an issue. Robots that could traverse land have been in place for quite some time but they tend to be slow. A team from the Computer Science and Artificial Intelligence Lab (CSAIL) of MIT are looking to create a robot that can not only navigate the ground but also take to the sky.

The endeavor opens up a world of possibilities. For instance, the machines envisioned by CSAIL can access areas that humans will undoubtedly find dangerous. A machine equipped with capabilities for aerial flight and land travel can be used for transporting mission-critical objects or even in the rescue of people. 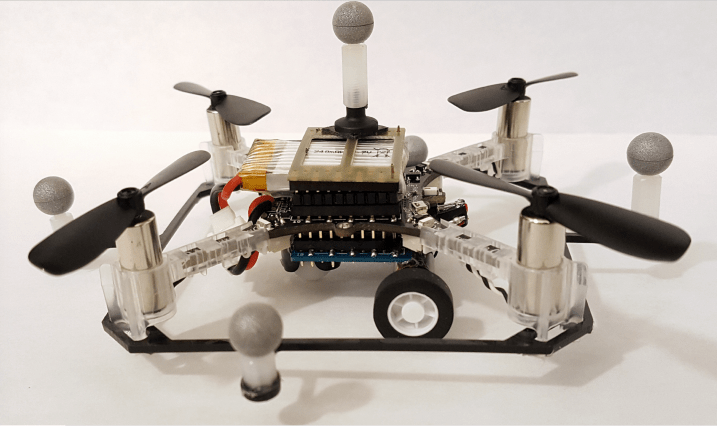 One of the researchers’ quadcopter drones with wheels. Photo: Brandon Araki/MIT CSAIL

MIT’s CSAIL outlined their plans for the land-sky machine in a paper. The team is hoping to achieve the goal through the use of eight quadcopter drones. These machines will be able to maneuver through parking spots, no-fly zones, and landing pads in a city-like setting.

A robot that can both fly and drive is helpful in areas that have a lot of barriers. In case it’s a land barrier, the machine can take to the sky; if it’s a sky barrier, then the robot can navigate through land.

Current models of drones don’t have a “driving capability” and there is a lot of benefit to one that does: it minimizes flight time and increases mobility.

The land-air system was presented at the International Conference on Robotics and Automation (ICRA) of the IEEE in Singapore in June.

How the flying-driving robot works

Araki worked on a project – a “flying monkey robot” – that was able to crawl, fly, and grasp. The robot monkey was able to navigate through obstacles by hopping over them and crawling around them. However, it couldn’t travel autonomously. It was this project that formed the basis for the new system.

To solve the autonomous travel issue of the robot monkey, the team devised different “path-planning” algorithms to ensure that the machine doesn’t collide. Driving capability was given through the placement of two small wheeled rotors located at the bottom of the drones. Test simulations showed that the new system can take flight for 90 meters or drive for 252 meters before their batteries died.

The addition of driving capabilities impacted the battery life of the machine. However, the team didn’t treat this so much as a loss because driving is still more efficient than flying.

Researchers involved with the project mentioned that their development could be used as a basis for developing flying cars that are both safe and effective.