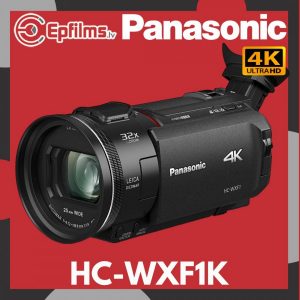 The line between smartphones and video cameras have blurred in recent years. It’s not uncommon to find mobile devices with incredible image quality that could rival bigger cameras. However, camcorders, like the Panasonic HC-WXF1, still offer so much more.

In fact, the HC-WXF1 markets itself as a “cine-like” camera. And it does provide some cine-style features not seen in similar cameras, including multi-camera capture. It also doesn’t hurt that the camera can shoot UHD 4K and capture 26MP still images.

The HC-WXF1 does have a lot of things going for it. And those looking to up their video game will find favor with what it has to offer. It’s a bit pricey but it does offer a range of features that can significantly improve video production. It may not have the specifications of a professional video camera, but it’s good enough for injecting creativity into making videos.

What are the basic features you want in a video camera? The obvious answer is an offering of impressive image quality, especially when filming in a low-light situation. Since most videos need some form of audio, it helps to have a camcorder that can record pleasing sound. Along with the offer of motion capture should also come support for still photographs. After all, why would you need to switch when you’re already holding a camera in your hand?

These are some of the very basic needs required of a camcorder and the HC-WXF1 supports them all. On the video recording end, users can shoot UHD 4K videos at 24 or 30 fps, as well as Full HD videos up to 60fps.

When it comes to images, the HC-WXF1 captures 26MP stills. The camcorder also has an in-camera 5.1-channel wind-shielded zooming microphone for recording audio.

Knowing what a video camera can do is great, but is it any good? Pretty much. The HC-WXF1 is equipped with a 24x optical zoom and 1/2.5” BSI MOS sensor, both of which ensure impressive image results. With Intelligent Zoom, you can zoom up to 32x when shooting in 4K and 48x when shooting in Full HD.

Certainly one of the most impressive features of the HC-WXF1 is its support for Twin Camera and Wireless Multi-Camera Capture. This feature allows you to record four different angles at the same time, which is really useful for travel-style vlogs. You can use up to three smartphones as your additional cameras.

Basically, their captures are fed into the HC-WXF1 to give you multiple angles. Even better, you can also record clean footage of the main feed, which will be sent to an SD card. 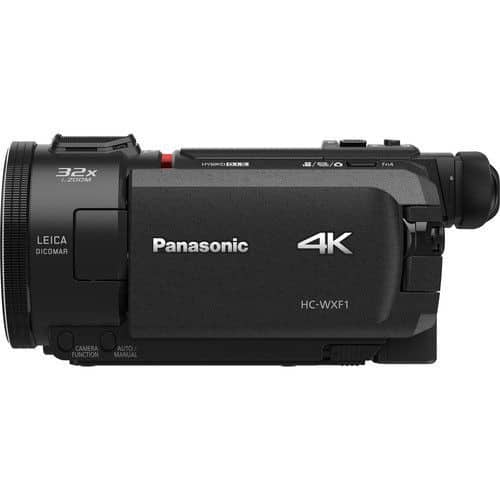 Owning an HC-WXF1 is like owning a miniature version of a film camera. While it does pale in comparison to what those used in filmmaking can do, but there are certain features to make you feel like you’re a proper filmmaker. This camera comes with an electronic viewfinder, a manual focus ring, and on-camera quick access buttons.

Filming a scene handheld can be tough. Shakes are a necessary part of the recording process. However, there are some shakes that just ruin the shot completely. Thankfully the HC-WXF1 is equipped with not one but three optical image stabilization systems (OIS) to remedy such an issue. The combination of 5-axis hybrid OIS Plus, Ball OIS, and Adaptive OIS provide the necessary stability for shooting in different kinds of situations.

There is a lot to like with the HC-WXF1, and it’s definitely a great companion for semi-professional video shoots. It can help you produce great-looking videos even if you use it for vlogging, livestreaming, or just everyday recording.

Although it can record it UHD 4K, it can only do so at 24 fps or 30 fps. Those rates will mostly work fine for documenting daily life and creating vlogs for YouTube but there are models that offer higher frame rates and at a cheaper price tag too. The GoPro Hero 7 Black offers 4k recording at 60fps and doesn’t cost as much as the HC-WXF1.

Then again, the GoPro has the adventure-minded client in mind and also comes in a smaller package. All that aside, the HC-WXF1 does offer wonderful features that make it ideal for budding videographers.

Overall, the Panasonic HC-WXF1 isn’t too shabby. Complaints may be lodged regarding its price tag and that is fair. But it does offer cine-style features that just might pique your interest. If you don’t want to pay so steep a price for this, Panasonic has other models you can consider.