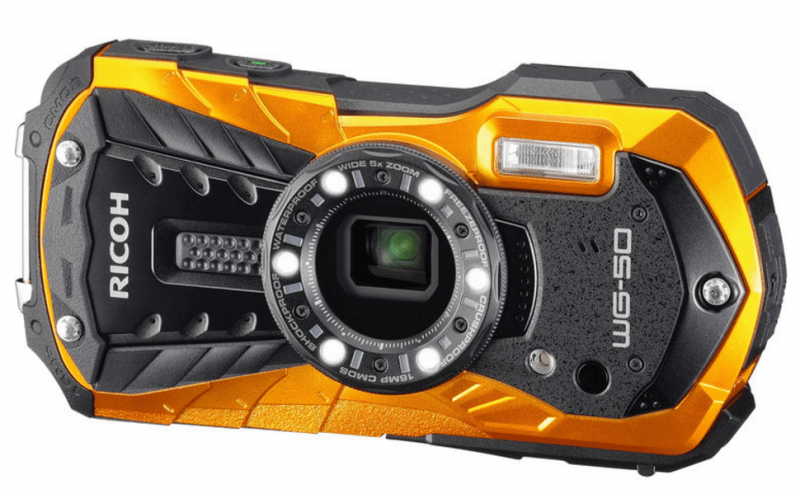 It’s been a while since Ricoh has updated their rugged, made-for-the-outdoors WG compact camera line. With the arrival of the WG-50 this year, it seems the wait looks to be worth it. The current model still sports the familiar rough design of predecessors but packs in a few additions.

Although there’s a lot of similarity between the Ricoh WG-50 and the WG-4, a unit that’s around three years old, the soon-to-released model is a successor to the WG-30. The skip in model number is not a glitch: there is a WG-40 but that model was only released in Japan.

Aimed at outdoor enthusiasts, the WG-50 comes with several features that make it the ideal companion for travels through different environments. It is waterproof up to 45.9 feet, shockproof up to 5.2 feet, and freezeproof up to 14 degrees Fahrenheit.  In addition, it can handle a 220-pound force and is dustproof.

Announced in May, the WG-50 was seen as a camera that could compete with the Olympus Tough TG-5, which was also introduced in the same month. Both models, more or less, were designed to take quite a beating.

Cameras designed for the outdoors need to be tough but also take great photos. Ricoh equips the WG-50 with a back-illuminated CMOS image sensor with approximately 16MP – specifications that allow it to be really sensitive and produce low-noise photos. The highest ISO range for the camera is 6400.

A large selection of Scene Modes

The WG-50 provides more than 20 scene modes, each of which will adjust the settings of the camera automatically to ensure best results – with the exception of Program Mode. The various scene modes include HDR, Handheld Night Snap, High Speed Movie, Underwater, Underwater Movie, Surf& Snow, Digital SR, as well as the usual settings such as Sport, Night Scene, Flower, and Landscape. 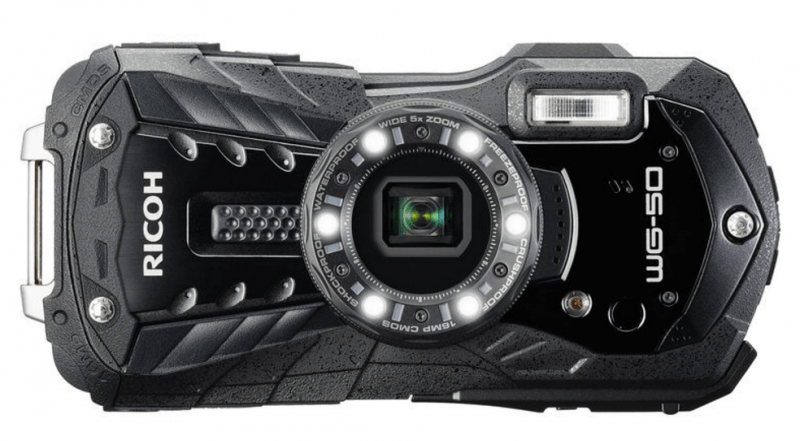 An upgrade of the WG-30’s Underwater Mode, the WG-50 features more natural coloring thanks to a more optimized white balance. Flash Bracketing has also been adopted for this model allowing two photos to be taken – one with Flash On and another with Flash Off – with just a push of the shutter.

The WG-50 also features six LED lights around the lens barrel, a feature that helps when shooting underwater as well as to provide more light when shooting in low-light conditions (a better alternative to using the camera’s flash).

The Ricoh WG-50 can shoot full HD video at 30fps. High Speed Movie is one of the many Scene Modes of the camera and it is through this feature that 15-second clips can be recorded in HD at 120fps.

The WG-50 stores photos in an SD card that is Class 4 or higher. In terms of connectivity, the camera has a Type-D micro HDMI high-definition video output, a micro-B USB 2.0 port, and twin IR remote control receivers.