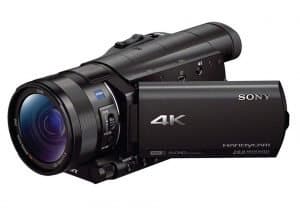 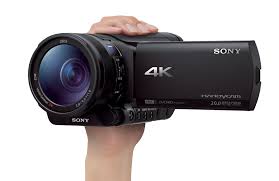 Sony has released the FDR-AX100, the company’s first 4K palm-sized camcorder. Not only that, this model is the first fully featured 4K camcorder that sells for under US$2000.

It weighs at around 915g and with its battery fitted and is just a quarter of the size of the previous 4K camcorder from Sony, which also happened to be its smallest prior to the release of the FDR-AX100.

It features a single, 1-inch backlight illuminated Exmor R CMOS sensor as well as a 12x Zeiss lens that has optical stabilization. These are the features that the new camcorder is based around.

TheSony FDR-AX100 features a range of recording modes in HD quality, which includes 60p. Apart from that, the camcorders also come with an overcrank mode that is able to deliver up to 120fps at 720p for slow motion effects.

The FDR-AX100 is built with an LCD screen and an OLED optical viewfinder. Additionally, it comes with HDMI out and built-in WiFi. Not only that, the camera also comes with near-field communications (NFC) for compatible smartphones.

The Sony FDR-AX100 also has built-in natural density (ND) filters at ¼, 1/16 and 1/64 to control light. This feature is something that is unusual for a consumer camcorder to have.

The sensor on this offering from Sony is also larger than many other professional models.

The kit that comes with the FDR-AX100 includes a lens hood and an IR remote control.

The target audience that would most likely want an FDR-AX100 are producers and directors who are looking to test out a 4K camera but don’t want to spend as much. Its also ideal for video journalists and filmmakers who are looking for a small camera that is unobtrusive and comes with a large sensor.

Other interested parties for the FDR-AX100 include those who have great experience with UltraHD TV or have plunged into that market. They may be on the lookout for more 4K content and might like what the latest 4K camcorder of Sony has to offer.

The camera is also a good choice for indie videographers who have not fully abandoned dSLR to take the plunge to UltraHD.

Make sure you change the settings to 4K mode when watching this footage, press PLAY first though.

a very good partner of mine

I have just recorded my brothers wedding using this and the final result is outstanding. Especially great on a 65" 4K TV!

I wanted a large sensor and this seems to be best for the money i paid.

This is a revolutionary model. Simply incredible! It's so easy and suitable for use!

Once you lay your hands on the AX100 you will never want to put it down.I am in shock that its this light & small. The still shots I have produced are better than all my DLSR's put together. Sony have done it again

1" sensor in a camera this size is unbelievable, This is a ass kicking cam. 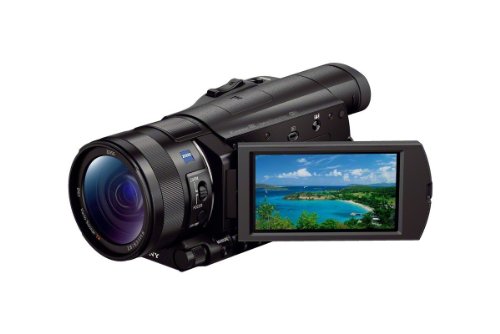