Cameras equipped with 4K video recording capabilities are on the rise. Almost every major manufacturer has their own version, each sold at varying price ranges. But what if you only have a limited budget but still want 4K video quality?

The good news is that there are camera makers who don’t bear the name Canon, Nikon, Panasonic, or any of those giants who can offer a 4K camcorder without breaking the bank. Since there are quite a few out there, how do you determine the right one for your needs?

Below are some suggestion to help you decide: 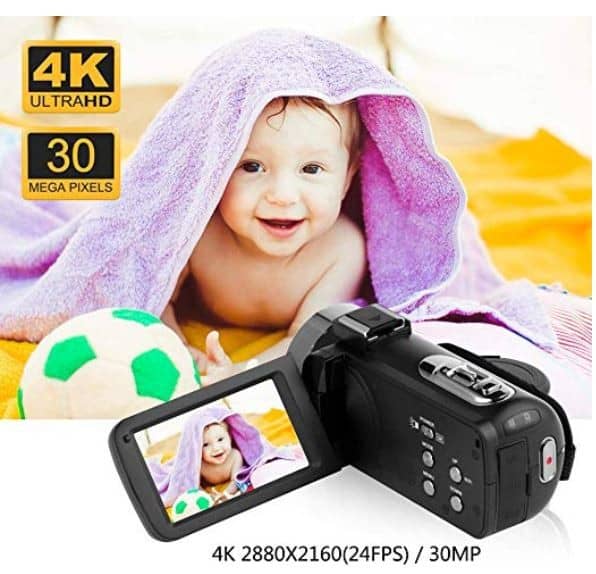 The SEREEE 4K camcorder responds brilliantly to the needs of the instant sharing generation. It even has touchscreen functionality to emulate smartphone use. And just like mobile devices, this too can be used shortly after getting it out of the box – no more of those steep learning curves.

Just because this camcorder isn’t on the high end of the price spectrum doesn’t mean video quality is sacrificed. It can deliver 4K footage at 24fps and Full HD video at 60fps. The camera can also take 48MP still images. All of those media can be easily transferred to your Android or iOS mobile devices via WiFi.

Also of note for this camera: night vision for continued filming even when it gets dark. 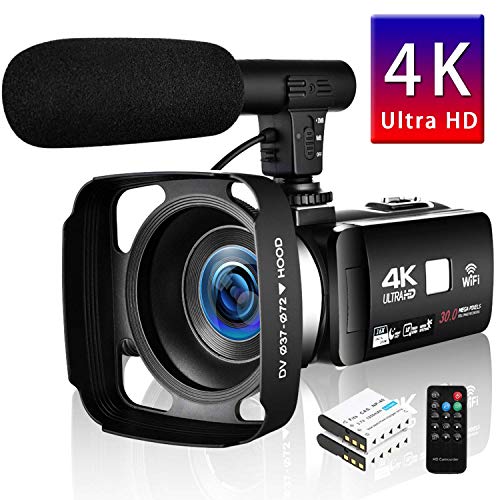 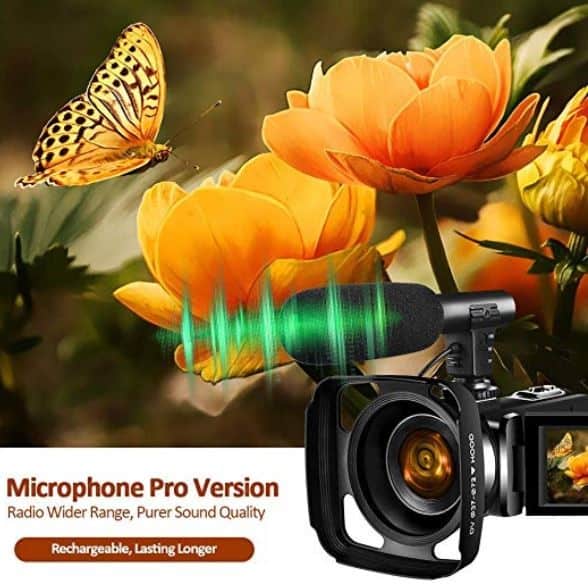 Like a lot of the video cameras that came before, this too has night support function and a 3-inch touchscreen. And just like some on this list, the Lakasara is able to offer 16x digital zoom and transfer media files via WiFi. 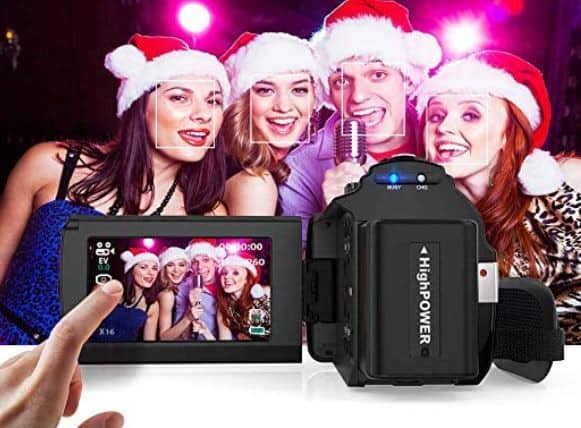 The Andoer 4K digital video camera captures both video and still images. It can shoot 2880×2160 resolution videos and take 48MP photos – all of these good enough for those looking for high-quality results at affordable rates.

Although other camcorders can better its 14MP CMOS sensor, this camera offers more or less the same tricks. It comes with infrared night vision for extended shooting until the night; it supports 64GB SD cards for storage; and it comes with a 3-inch capacitive touchscreen.

With a fast Novatek 96660 chipset, this camcorder is more than capable of of your precious moments. 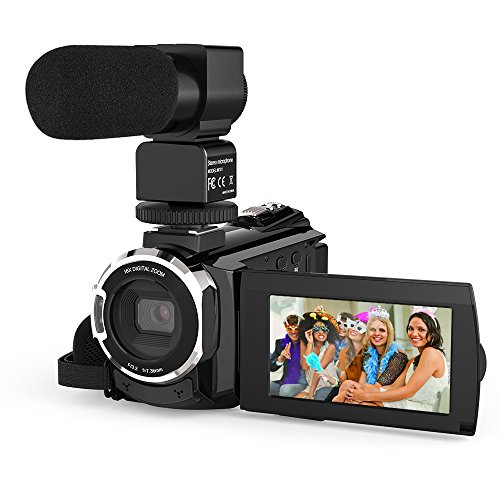 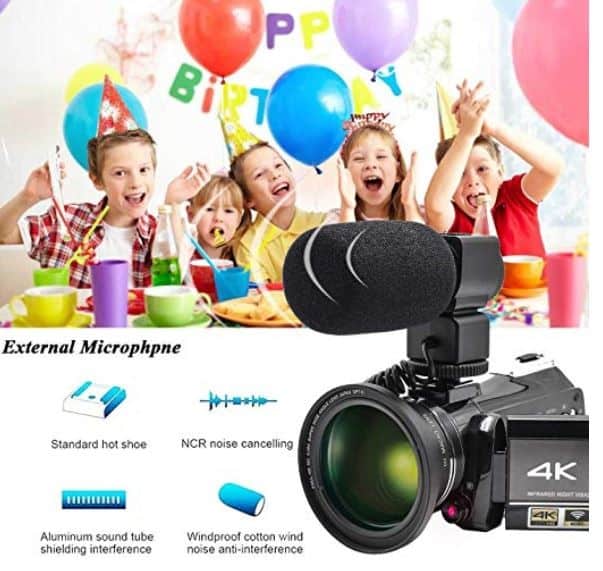 Equipped with a 24MP CMOS sensor, this camcorder can capture both images and video in high resolution. The three-inch capacitive touchscreen helps makes for a very user-friendly operation given the widespread use of touch devices these days.

One of the things that the Ultra HD camcorder has got going for it is its size and weight. At 295 grams and measuring 120.5×49.7×62.9mm, its a small camera that won’t cause the bearer any burden, no matter where it is taken.

Like other camcorders, this too uses SD cards (up to 64GB) for storage of recorded media. It also has a night vision function to allow recording even in the dark. 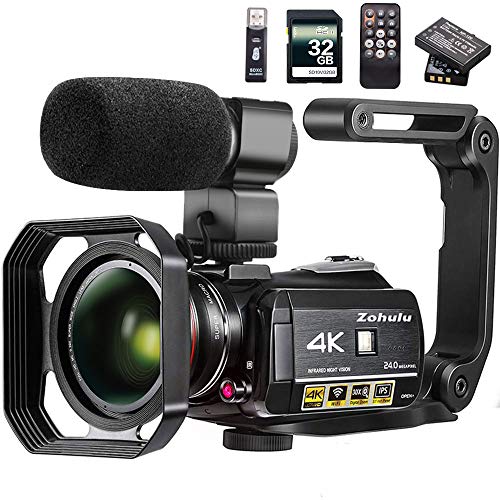 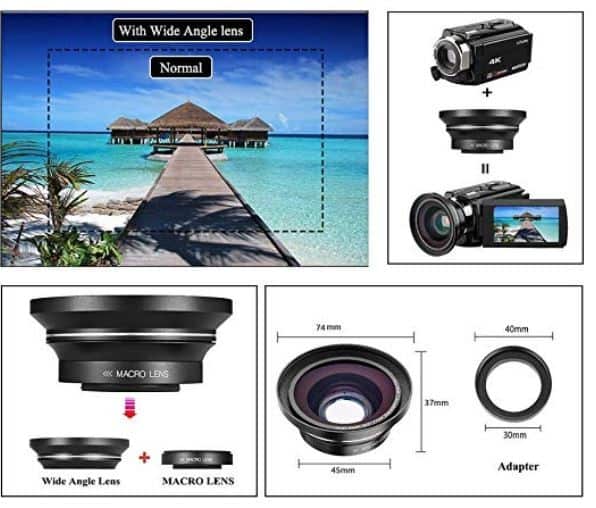 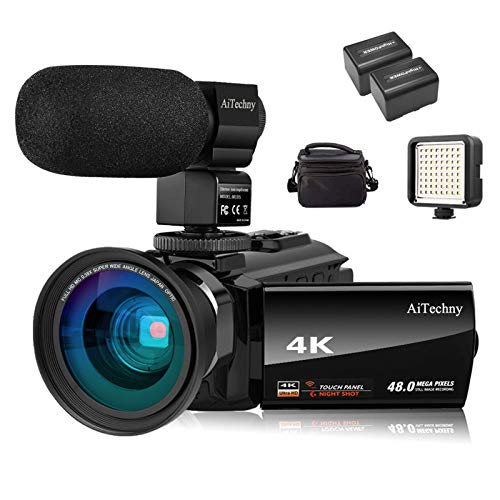 This model shares a lot of features with those in its price range. Like the Sunlea 4K video camera, this too has night vision function. It also comes with a 3-inch LCD touchscreen and has support for WiFi for easier media transfer. Media transfer can also be done through WiFi or SD card.

While there are similarities, there are also differences. This camcorder can stretch digital zoom to 30x and comes with a 72mm wide angle lens. This model does slightly better than the Sunlea in terms of video resolution: it records in UHD at 24fps while Sunlea records 2880×2160 at 24fps. 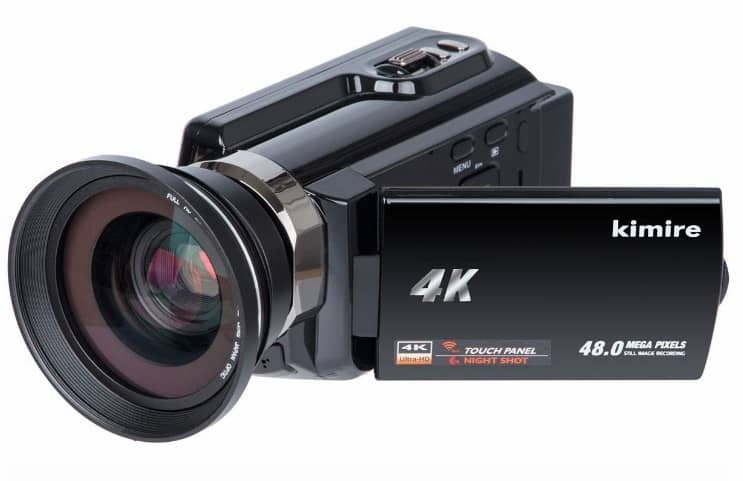 Equipped with a 0.39x super wide-angle lens, the Kimire 4K camcorder can capture a large area of the scene in front of you. This becomes extremely helpful when in an area with such stunning landscapes.

Although it shares many features with fellow camcorders in its price range, it does come with a 3-inch capacitive touchscreen that can be rotated to 270 degrees. It records 2880×2160 video at 24fps and takes 48MP still images. You can also zoom up to 16x to focus on details or get a closer look at structures and landscapes.

You can also use the companion NovaCam app to control the camera remotely on your smartphone. 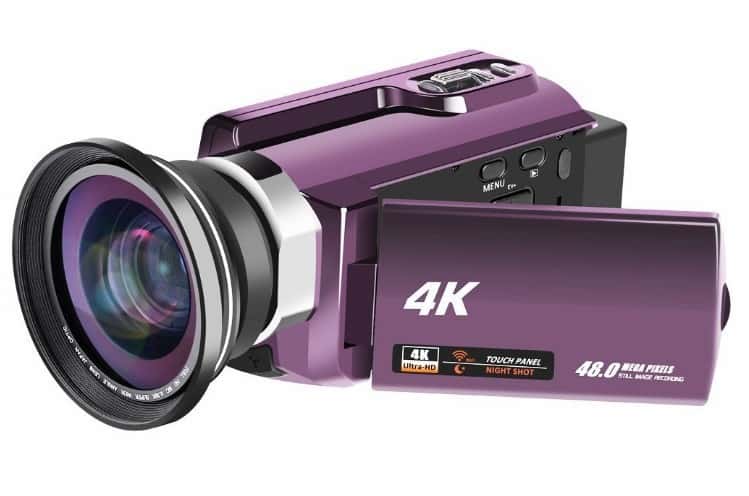 The RAINBOWDAY 4K video camera features a 72mm professional 0.39x super wide angle lens that captures as much of a scene as possible. Not only that, other lenses like fisheye lenses can be used to for more creative output.

Composing shots with the RAINBOWDAY 4K is easy thanks to a three-inch LCD that can be rotated to 270 degrees. It comes with a built-in microphone and speaker and features such as Beauty Face and Face Detection.

The camcorder has WiFi support and with the NovaCam companion app, you can operate the camera remotely. Recording footage in badly lit or dark environments can also be remedied with the camera’s IR function. 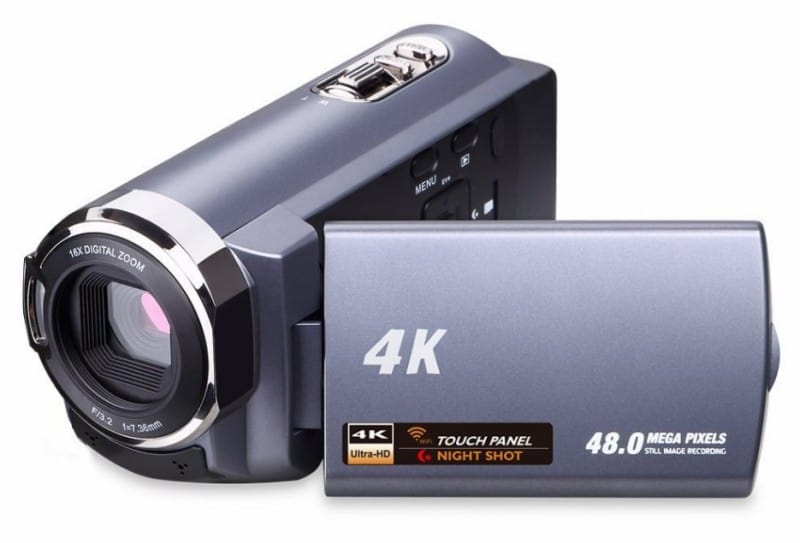 What do you look for in a 4K camcorder if you are a first-time buyer? The advanced features may not be on the top of your list, but some essentials need to be present.

Well, the 4K video camera from has got the basics down. It is easy to use (touchscreen interface and comfortable to hold); it takes great footage and images (48MP resolution with 16x zoom); it has a decent battery life; it supports popular media formats (JPEG and MP4); and it is easy to transfer images to a smartphone or similar device (through WiFi or SD card).

In addition, the Sunlea 4K camera has night vision function. Meaning, you can still continue recording even after the sun has gone down or light quality isn’t exactly great.

A lot of the cameras here share similar features whether they are video recorders or action cameras. Having so many shared features among devices when trying to make a decision can be daunting, but you can be guided by knowing exactly what you want.

The cameras on this list may share similar features and functions but they do have differences, particularly when it comes to video resolution and battery life. Size may also come into play as you might prefer the small nature of an action camera over a camcorder.

So take time to think about what you really want to get out of your camera. Do you want to take it on adventures? Or are you looking for an affordable device to record the growth of your child?

Knowing exactly what you want will help you find the video camera you’re looking for, even if there are so many others like it.