You are here: Home / EP's Latest Camera News & Releases / X-wing quadcopter prototype looks about ready to protect the planet from the Death Star

Drone modder Olivier C is back with a new custom “Star Wars” quadcopter, an X-wing starfighter that looks just ready to battle with the Galactic Empire.

A crafty Star Wars fan called Olivier C from France has come up with another modified RC quadcopter, this time an X-wing starfighter. Any fan of the beloved original trio of films by George Lucas can tell you that the X-wing starfighter is used by the Rebel Alliance to battle with the Empire. Even more famously, Luke Skywalker was aboard one when he destroyed the Death Star.

Olivier C not only makes these modified drones, but he also films them in flight and shares the footage on his YouTube channel.

One of his first Star Wars-related uploads was the uber popular Millenium Falcon, which let’s face it, is just about any fans wishlist of space vehicles to fly. Olivier C was able to creatively piece together a drone in the style of the Han Solo- and Chewbacca-piloted ship. Obviously, the same exact ship couldn’t be replicated because of the quadcopter’s propellers. Nevertheless, the similarity is striking.

He followed up the Millennium Falcon with a starfighter used by the Galactic Empire, the TIE/IN starfighter or TIE Interceptor. For this build, he uploaded two videos on his YouTube channel. And unlike the Falcon, this one is a much closer replica of the interceptor complete with solar array panels.

A third upload saw Olivier C build an Imperial Star Destroyer, which is as equally impressive as his previous two attempts. In case you want to build one for yourself, Olivier C provides guides on his RCGroups page.

Olivier C, a known drone modder, has come up with another modified RC quadcopter, this time an X-wing starfighter prepared to protect the planet from any Death Star.

Olivier C has also built a snowspeeder that almost looks like an exact replica seen on film.

And more recently, Olivier C has added an X-wing fighter to his collection. The build, as of now, is just a prototype as it lacks lights and finishing touches. Nevertheless, the prototype is seen in flight and it’s worth looking forward to the final build. 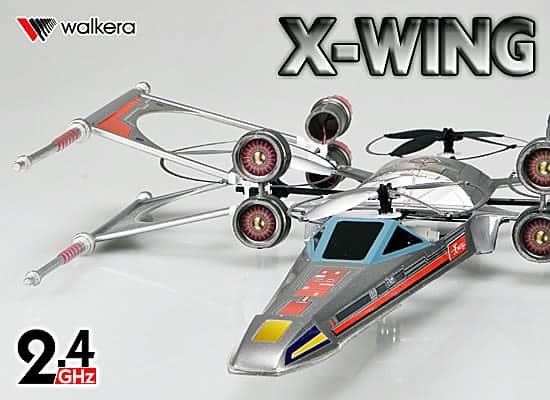 Based on what Oliver’s completed so far, it looks as if the Rebel Alliance would win a war against the Empire.

You can find other drone builds by Olivier C on his RCGroups blog. You can also check the videos he has upload on his YouTube channel.