The Canon XF400 and 405 are tried and tested out in their field and have already experienced any teathing problems associated with new video cameras. With up to date firmware this camera really can become the one-stop shop for high-quality HD & 4K video. The first question most people ask is what’s the difference between the XF400 & the XF405. Well I can tell you, the 405 includes a 3G-SDI terminal, this gives you a secure BNC connection that enables a 1920x1080 4:2:2 10-bit signal output for broadcast-quality HD. We will focus on the 405 in this review. 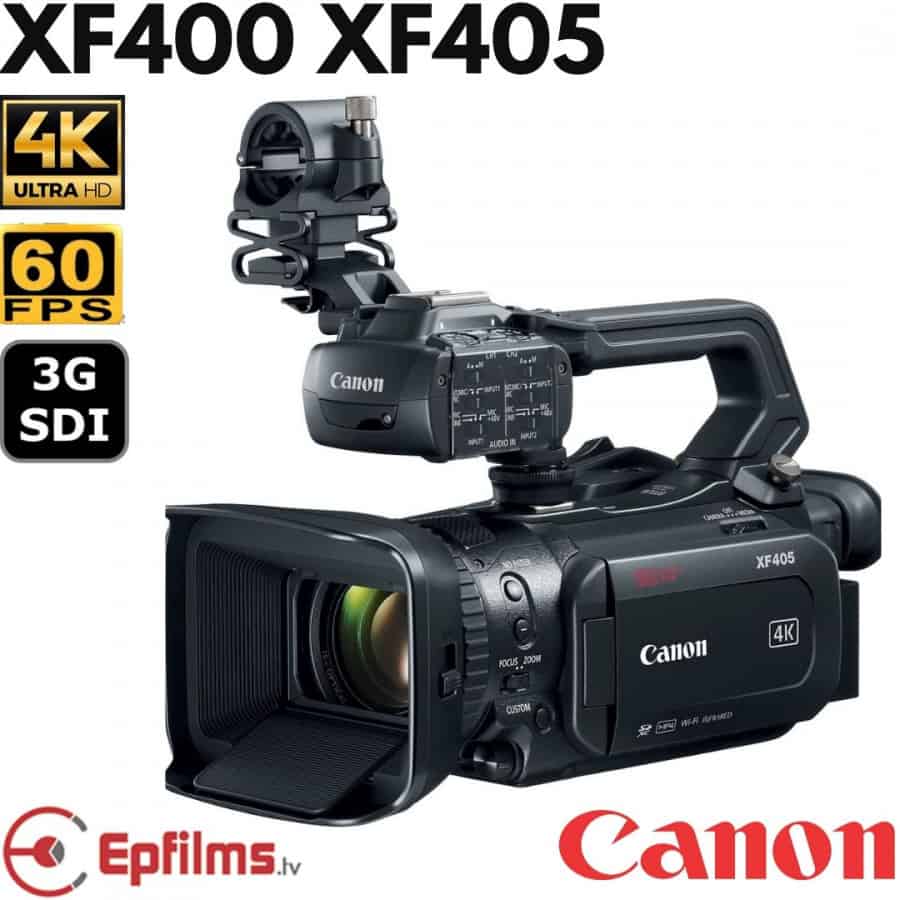 Launched together with two other Canon camcorders with similar tech, the XF405 differed from the pack by having more features that would attract advanced users. And in a world where users would rather use smartphones, DSLRs and compact cameras to shoot video, why should this Canon model even be considered?

The Canon XF405 is portable, making it comfortable to carry around even when a shoot or coverage lasts an entire day. It supports a popular recording format, MP4, which is a major plus in terms of compatibility. The camcorder records 4K UHD video at 60p and is also capable of shooting slow-motion video at 120fps in Full HD.

With other tricks up its sleeve, the Canon XF405 makes a case as serious and capable camcorder for filmmakers and broadcasters. 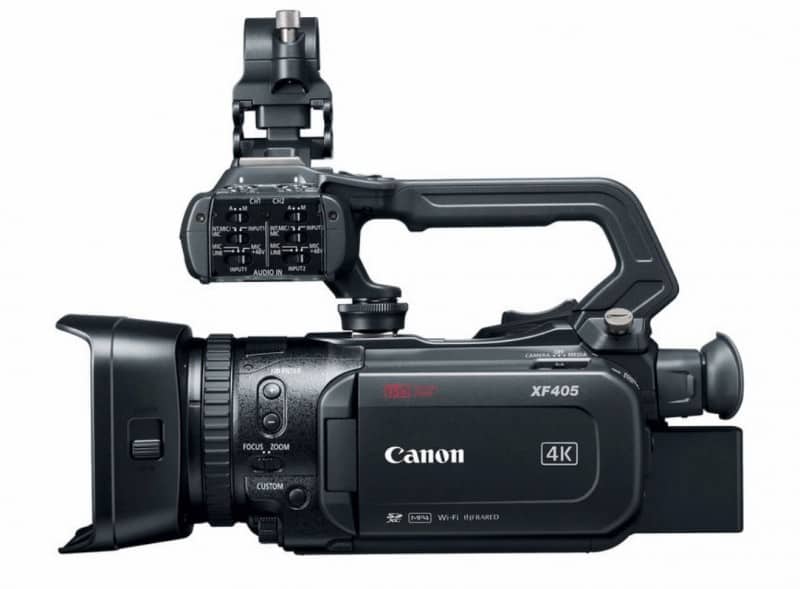 The Canon XF405 combines outstanding 4K UHD image quality and portable design, making it an ideal companion for news coverage that lasts all day or even documentary shoots that lasts for hours. This camera can also make a case for camcorder of choice for covering sports events.

With a 1.0-inch 4K UHD CMOS sensor that can record 4K UHD video at 60fps and slow motion Full HD video up to 120fps, the XF405 makes a strong case for use in various shooting scenarios, be it a creative production or a professional one.

The larger sensor also comes with other benefits. For one, it allows larger photosites which guarantees better image quality that also has minimal noise, even when shot in a low-light environment. A bigger sensor also guarantees a shallower depth of field when shooting with large apertures, resulting in more creative results. The camcorder’s capabilities are also made possible thanks to the new DIGIC DV 6 image engine.

The Canon XF405 also makes it easy to capture the scene as it is with its Wide DR Gamma support. Such a feature achieves an 800% wide dynamic range that captures color accurately and with no blown highlights.

A 15x optical 4K UHD zoom lens is used on the XF405 camcorder. The lens is also able to maintain a 4K UHD quality throughout the entire zoom range, which covers 25.5 to 382.5mm. Thanks to the camera’s 4K UHD sensor, you can stretch zoom to 30x when shooting in Full HD. 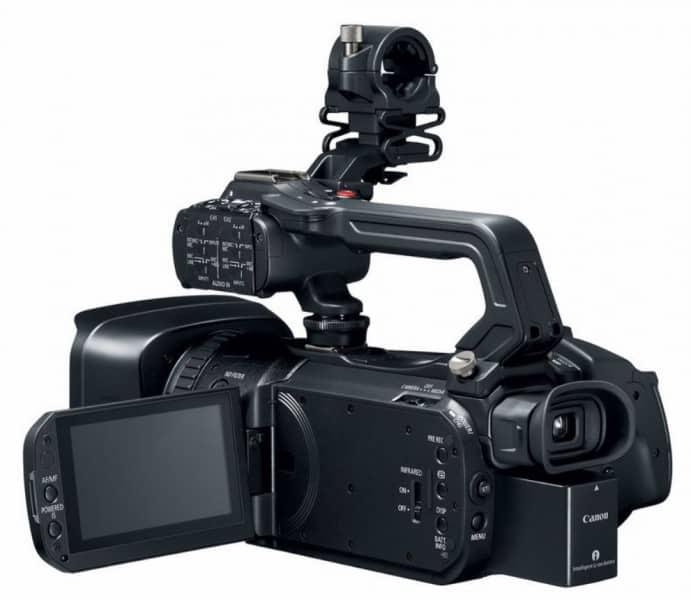 The XF405 was the most expensive model out of all the three camcorders it was released with, and there was good reason for it despite them sharing many features. This model comes with a 3G-SDI terminal for integration with professional workflows in addition to supporting HDMI 2.0 for video output.

An adjustable 3.5-inch touch panel LCD monitor is a nice touch for easier composition. The camcorder also comes with a built-in 0.24-inch electronic viewfinder for better usability. It also has a detachable handle to accommodate various shooting situations.

Lets look at the Features and Spec below

Class U3 recommended for recording at 150MBPS

No. Timecode out via HDMI is possible

1) Aperture (including ND control) (2) Focus The amount by which the focus is driven toward NEAR and toward FAR can each be controlled in 3 steps. (3) White balance (4) Shutter speed (5) Gain (6) Exposure compensation (7) Shooting mode (8) Zooming and SLOT SELECT control can be exercised. The free memory remaining on the media, time code, remaining battery charge, etc. can be checked. Live View.

When Wi-Fi has been set manually in the XF405/XF400 select
“Open Encoding,” “Open WEP,” “Shared key/WEP”, “WPA, WPA2-PSK,” or “WPA2-PSK AES.”
(*) At the WPS setting stage, the settings are established automatically according to the authentication and encryption systems set at the access point.

Location (latitude, longitude and altitude) as well as the GPS
information while using Coordinated Universal Time (UTC) can be added to MP4 movies and photos. Also, based on this information, the satellite data acquisition status can be checked in camera mode.

Canon XF400 Review from an OWNER ! 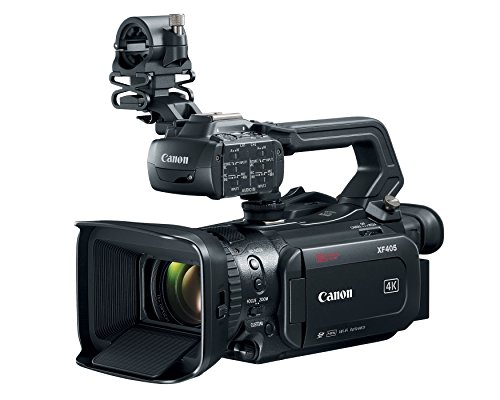 This has been an absolute pleasure to use. I was looking for a 4K camcorder that was professional grade but light and small. This has met my expectations