When attached to the GFX 50S, the lens provides a 36mm focal length equivalent. In addition to an F2.8 aperture, the lens also offers a compact and lightweight design, making it a great companion when shooting handheld.

The GF 45mm is ideal for use by shooters who dabble in street and documentary photography where a lot of walking is involved. Weighing only 490g, the camera is light enough to be carried around while not being an added burden. 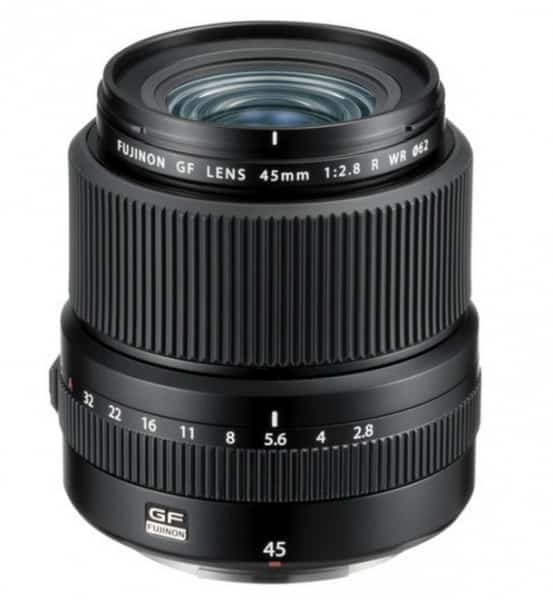 The GF series of lenses from Fujinon has been praised for its quality. Lenses from lineup are known for their unique color reproduction, high resolving power, and rich tone reproduction.

The GF 45mm has been designed to the same exact high standards. With this lens, photographers are provided with another tool that will aid them in producing the best photos possible.

The lenses in the GF series have been praised by professional photographers and enthusiasts alike for its capability in capturing detail to the highest level and providing a three-dimensional feel. The family of lenses has also been praised for ease of operation thanks to its compact and lightweight body.

The GF 45mm brings the same qualities users have loved with the past lenses while also offering a different way to capture subjects.

Before the arrival of the GF 45mm, the lineup consisted of five lenses:

Like the rest of the GF lenses, the GF 45mm also features high resolving power. It has a construction of 8 groups and 11 elements, making it more capable of correcting aberrations.

The GF 45mm adopts an inner focus system which allows the lens to capture high-quality images with minimal aberration fluctuation caused by a change in the shooting distance.

Ghosting and flare from incident light is also addressed by the lens with the use of Nano GI coating.

One of the selling points of the GF 45mm is its portability. Fujifilm takes it a notch higher by making the lens weather resistant and dust, making it an ideal companion no matter the weather and condition.

This was all made possible by sealing the lens in ten areas. With this level of protection, the lens can perform in light rain, dusty environments, and cold weather (even as low as -10 degrees Celsius).

The aperture ring of the lens has a C (command dial mode) position on the camera body, which allows the aperture of the lens to be adjusted in order to suit the photographer’s preference.

Unintended movements of the aperture dial are also avoided through the addition of a locking mechanism on the A (Auto) and C positions.