Most of us look for two things in a good camera: portability and efficiency. But in most cases, you have to sacrifice performance for a lightweight camera or suffer from the weight of a highly efficient one. This need has inspired Fujifilm to finally create a camera that meets both worlds, thus the birth of the X-E4, the smallest X-mount camera today. Let’s take a closer look:

It’s sleek, modern and compact. There are many reasons to love the new Fujifilm X-E4, a rangefinder-style mirrorless camera with a built-in viewfinder. Following the X-series retro-style mirrorless cameras, the X-E4 is a welcome improvement from the X-E3, which also became a hit for both professionals and hobbyists. Released on March 4, Fujifilm’s smallest and lightest mirrorless camera yet promises to deliver on all fronts.

The combination of Fujifilm’s latest sensor and processor is the biggest improvement on the X-E4, which gives you the shooting power of the X-T4 in a camera that only weight around 340g. With a 26MP sensor, you’re guaranteed the best image quality, readout speeds of 20fps with an electronic shutter and a native base ISO of 160.

The quad-core processor also ensure that everything moves fast combined with the best UHS-I card that you can invest on for the camera’s USH-I slot. With the goal of delivering in both stills and videos, the X-E4 is also equipped with various film simulations.

It includes the Classic Neg that offers a vintage film feel, Astia that’s ideal for portraiture, Classic Chrome that looks like a dated slide film and Eterna that’s perfect for post-production color grading. To add to its quality, the X-E4 also has an expanded phase-detection autofocus system that features 425 selectable points to deliver more accurate focusing efficiency in a wide variety of lighting conditions.

Like its predecessor, the Fujifilm X-E4 is designed to attract consumers who are looking for a pocketable camera that doesn’t sacrifice on quality. This new version is slightly smaller but a bit heavier than the X-E3, although it’s still the lightest among Fujifilm’s fixed-lens X100V when the XF 27mm F2.8 R WR lens attached to it. Here are some of the things that you will get with the X-E4 design-wise: 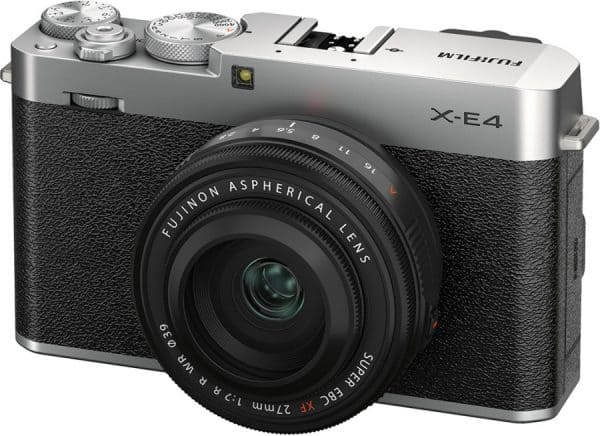 The faux-leatherette that covers most of the camera’s body gives it a very vintage look that’s also balanced by the magnesium-alloy top plate that adds a modern finish to the X-E4. But with portability in mind, a few features were removed from the X-E3 to make the X-E4 more geared towards minimalism.

This new camera has no d-pad on the back, no built-in grip, no thumb grip and no autofocus switch, which we last saw with the Fujifilm X100V. This has gained divided opinions among photography enthusiasts. While some don’t mind these reductions, others feel that the X-E4 should offer more than just this stripped-down approach.

Another downside for this camera is that it’s not weather-resistant and its EVF is very similar to the X-E3. But for a starting price of $850, you’re definitely getting a smart investment in a camera that’s able to combine efficient performance with a compact body that allows you to bring it everywhere.