The leader in drone and aerial systems technology, DJI, recently unveiled a  compact yet powerful easy-to-fly drone packaged in a foldable and sleek body that makes it portable and easy-to-handle. Seen as the rival to GoPro Karma Quadcopter, the first drone, which was also unveiled few days earlier and is the very first drone of the action camera manufacturer, will also be released on the same month as the DJI Mavic Pro 4K drone camera.

In the case of the Chinese innovative company, the Mavic Pro 4K, is the first personal drone from DJI that was deliberately designed as a compact drone that is so small that makes it both functional and appealing. It also weighs less than a kilo at only 1.62 lbs. Flying at a maximum speed of 40 mph in Sport mode, the Mavic Pro has dimensions of 83 x 83 x 198mm when the propellers are folded.

The DJI Mavic Pro 4K boasts of a sleek, compact design is foldable that makes it portable and easy to slip in a backpack, a feature drone enthusiasts and videographers who are always on-the-go, will enjoy. Its four propellers can be folded that makes it possible to lessen its dimensions. Moreover, its body is covered by protection, with the gimbals and the camera itself, secured by a transparent cone that makes it a rugged and compact piece of shooting device.

Aside from the foldable propellers, there are numerous features the DJI Mavic Pro has. One is its excellent and smart sensors that make the drone able to feel and be aware of its surroundings. This feature was added by DJI in the Phantom 4 and the same feature was also packed in the DJI Mavic Pro.

This drone also has a Flight Autonomy guidance system as well as the obstacle avoidance feature. These include redundant sensors, ultrasonic range finders, dual-band satellite navigation, deep learning processors that are designed for intelligent flying modes as well as five vision-positioning cameras. The autonomy guidance system makes it possible for non-drone users to fly the drone even if this is their first time. Moreover, the drone is able to recognize subjects as well as obstacles such as bicycles, buildings and trees.

The DJI Mavic Pro is capable of shooting 4K videos and is equipped with a 12-megapixel camera that can also shoot images in Adobe DNG RAW. Additionally, it can also be flipped at 90 degrees so it can take photos in portrait mode for vertical shots. On the downside however, the less expensive drone has less resolution than the more expensive DJI Phantom 4.

The DJI Mavic Pro is designed for long range flying and also uses OcuSync Transmission Technology. This encypted transmission system can reach a range of up to 4.3 miles and send signals. It also supports 720p HD video or 1080p HD transmission for live streaming to Periscope, YouTube and Facebook Live. This is made possible by the integration of the Mavic Pro with the DJI GO app. The transmission system is also capable of photo and video downloads as well as vital statistics transfers of the drone in real time. 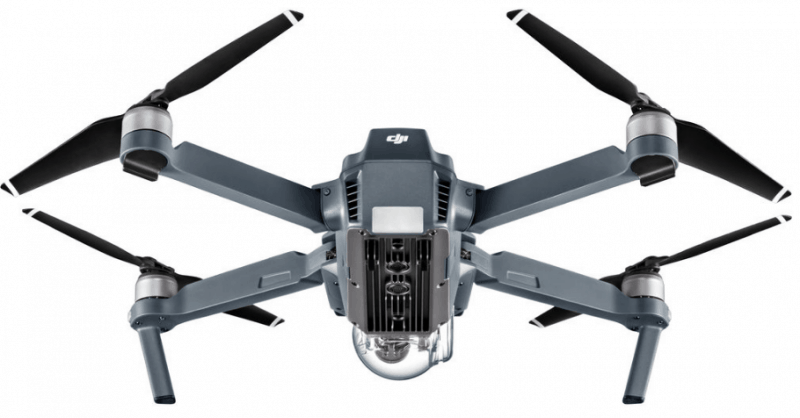 For more stable videos and images, the DJI Mavic Pro has a three-axis gimbal that is perfect for aerial photography with the camera shooting at 30fps and 1080p HD video at 96fps.  The drone now has an improved minimum focus distance of 19 inches or 0.5 meters. Moreover, it is also compatible with the DJI Goggle. The latter is an FPV goggle that can be applied for a more immersive flying. It features two 1080p LTPS displays and has an 85° angle of view. Meanwhile, connectivity is via the built-in OcuSync system that offers a short delay of 120 milliseconds, thus making it seamless.

The DJI Mavic Pro 4K camera boasts of many features that are new and exciting for drone enthusiasts. One of the pros of this drone is its folding feature as well as portability. This quadcopter also has brilliant features like “Follow Me” and Flight Autonomy. It is also durable and sturdy because of the transparent cone that protects the camera and the gimbals.

On the flipside, 4K resolution is not as excellent as the DJI Phantom 4 and the camera and gimbals are not removable.

Overall, the DJI Mavic Pro 4K quadcopter is an intelligent and powerful drone despite its being compact. While the resolution is not that perfect, the Mavic Pro is one of the best in its class because it is fully packed with features.