You are here: Home / Aerial Filming / Fotokite Phi: An Aerial Camera on a Leash

If you’re familiar with the concept of flying a kite, then you’d get the idea behind the Fotokite Phi. The camera’s official site says it’s “Made for the hobby photographer, the action sports enthusiasts, the guerrilla journalist and the gadget aficionado.”

Fotokite Phi was conceptualized by Sergei Lupashin, a robotics researcher. He spend a decade working on drone technology which included his doctoral work at the Flying Machine Arena at ETH Zurich, a Swiss science and engineering university. He also started his own company called Perspective Robotics AG. The fruit of all his labor is the Fotokite Phi, a quadcopter with a leash. 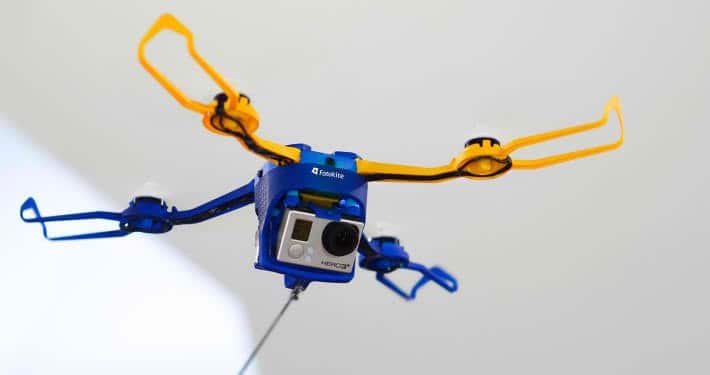 On first notice, the Phi just looks like a simple toy, but that design was not by accident – it was on purpose. Lupashin worked on sophisticated drones in the lab, but bringing that technology to the outside world was a source of his frustration. He always dreamed of making a drone that is accessible and safe for consumers to use, but also one that’s armed with sophisticated technology.

Enter the Fotokite Phi which was announced through an Indiegogo campaign. Despite its simplicity, the Phi is not some poor man’s drone. Rather, it’s an operator-guided flying camera capable of providing a different kind of aerial photography. Lupashin even refers to it as a “flying selfie stick.”

With the Phi, you can capture astonishing aerial photography and videography, but with as little effort as possible. The device can be used safely in crowded situations, be it a party, a sporting event or any social gathering for that matter. It can even be used by media organizations when covering protests or any other event that requires aerial coverage.

Since the camera is tethered, it functions more like a manned aerial vehicle, and one that won’t get away from you. Technically, it also isn’t a drone which is why Lupashin’s company is working at securing special-use permission from the Federal Aviation Administration. 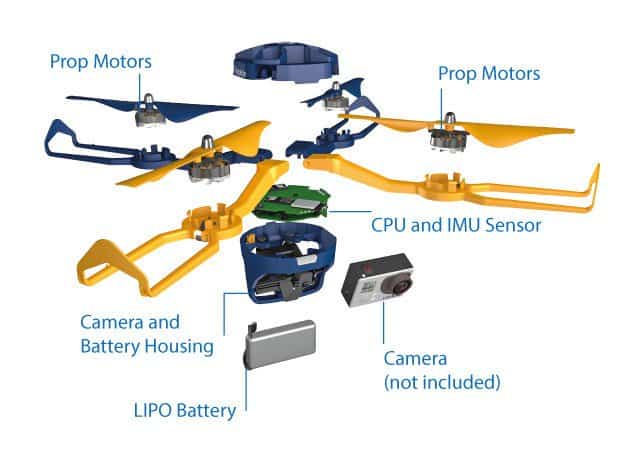 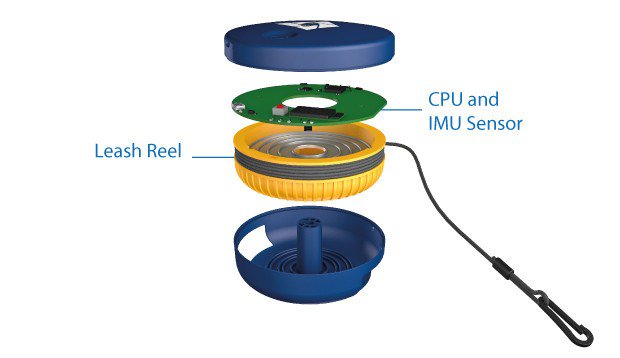 Although simple in looks, the engineering behind the device’s creation is quite sophisticated. For instance, the tether isn’t just a leash but something that allows you to operate the quadcopter using hand gestures. The Phi launches automatically launches toward the destination you’re aiming at with a simple quick shake. To move it around, you simply need to twist the handle. And just like a kite, you can lengthen the tether for more height (up to 26 feet high).

With the tethered design, costs are kept down because users don’t need GPS or a remote control to operate the device. Also, the design eliminates the need for calibration. Basically, you can launch the Fotokite Phi without needing to adjust any settings. It was designed that way – to launch into action at any moment.

Lupashin’s quadcopter doesn’t come with a camera though. You can hook up a GoPro to the device, and it turns on automatically when the Phi takes flight. Also, while you’re flying the camera with one hand, you can use the other to live-view the stream from the camera.

Another impressive aspect of the Fotokite Phi is its collapsible design. You don’t even need to disassemble the parts – the arms just fold up and the device neatly fits inside a cylindrical carrying case.

Fotokite Phi: a flying camera on a leash

The Phi is also quite light, coming in at around 12 ounces. As such, it’s quite the portable device too. With regards to the camera that can be attached, the Phi supports GoPro Hero3, Hero3+ and Hero4. And sadly, the GoPro is the only action camera the Phi is meant to support.

Another equally sad aspect about the Fotokite Phi is its flying time: it can only achieve about 15 minutes. However, it does have a built-on rechargeable battery that can quickly be recharged through USB using a portable battery.

The Fotokite Phi is not the first of its kind. Perspective Robotics previously developed the Fotokite Pro, a device similar to the Phi but more expensive and complicated and made for media organizations. Lupashin’s company intentionally designed a quadcopter for the media first so they can learn how to make one for consumers.

Given the low-cos of the Fotokite Phi, it wouldn’t be a surprise if professional users become attracted to it.