Garmin unveiled the newest member of its action camera family, the VIRB 360. As its name suggests, the camera records 360-degree video but packs in much more thereby making it quite the expensive device. The camera will be available in June 2017 and will retail at $799.

With a marketing tagline of “If it’s worth remembering, it’s worth a VIRB 360,” Garmin aims to provide adventurers a new way of documenting and sharing their experiences. The camera shoots spherical video in high resolution up to 5.7K and it can also capture 15MP stills. Plus, it is waterproof.

Garmin not only equipped the camera with high-resolution capabilities, they also built four microphones into the camera which enables it to record 3D audio that matches the video. Both stabilization and stitching are done in-camera rather than relaying that task to a smartphone.

While the features of the camera are definitely tantalizing to adventure junkies, it’s worth noting that the camera can only support about an hour of battery life. However, the exact amount of time the camera’s battery can supply largely depends on what mode is being used. 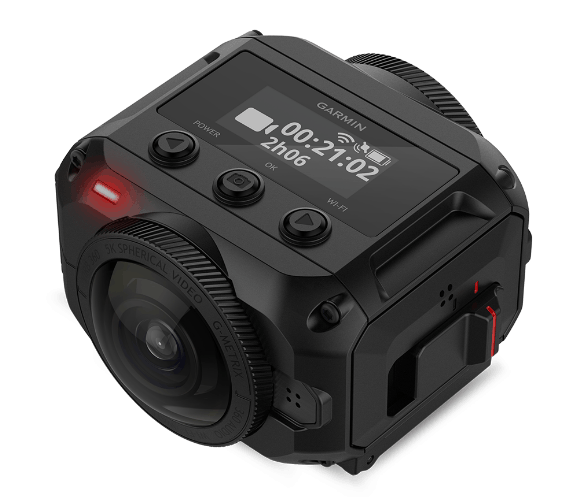 Garmin has waded into the 360-degree action camera market with their VIRB 360, and it differentiates itself from competitors by allowing users to create data overlays – a feature present in other Garmin action cameras. With this feature, the VIRB 360 can measure different sorts of metrics, such as altitude, distance traveled, and speed. In short, it can calculate just how fast or how high a user went.

Since Garmin is also known for their GPS devices, it comes as no surprise then that the VIRB 360 comes with built-in GPS and GLONASS. On top of that, the camera is also compatible with the company’s heart rate monitoring accessories.

All the metrics measured by the VIRB 360 can be overlaid on both photos and videos. The placement of the text on whichever medium can also be customized. This is a neat idea whether livestreaming a ski jump or documenting a downhill biking adventure.

Are the features provided by the Garmin VIRB 360 enough to persuade adrenaline junkies to pick it over the rest of the competition? It is tempting but there are models available right now that are less expensive than Garmin’s latest entry into the action camera market.

The Nikon D5 is the company’s first foray into the action camera market and the camera supports 4K recording. Samsung’s Gear 360 is capable of capturing 4K and also supports livestreaming. Garmin, on the other hand, upped the resolution a bit and provided support for 3D audio and data overlays. It also comes with a tripod.

The question is: are these features good enough to sway consumers to buy the VIRB 360?

GoPro, the leader when it comes to action cameras, will be releasing their own 360-degree camera at the end of 2017. In short, those who can’t wait for that may see interested adrenaline junkies try out the Garmin VIRB 360.